U19s captain Harry Nevin says he is aiming for more trophies after he captained North End to victory in the Central League Cup semi-final on Wednesday afternoon.

After sealing the EFL Youth Alliance league title last week, the U19s were in Central League Cup action at Springfields on Wednesday afternoon as a young side featured for the reserves in the 2-1 win over Carlisle United. 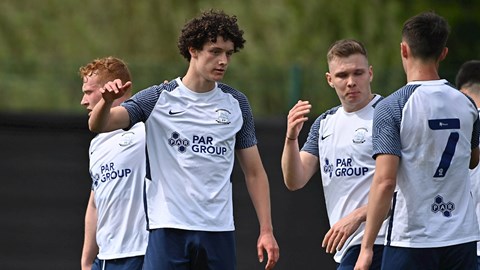 That win sealed a place in the final, and with the EFL Youth Alliance Cup final still to come, as well as a chance to win the Central League itself, Nevin and his teammates are aiming for more success before the end of the campaign.

Speaking after the win, the 18-year-old said: "We want to try and win everything we can, we've had a brilliant season so I don't see why we can't win them all when we're playing like this and have a team like this, we can win them all.

"There have been games where we've come from behind and in cup games and semi-finals where we've been behind and then come out on top at the end of the game so it just shows how much this team will dig deep to win something."

The U19 skipper felt North End were worthy winners against Carlisle, and believed they showed character to respond quickly to the visitors equaliser in the second half.

"We're absolutely delighted, the lads put in some shift there, they are a tough team to play against and once again we came out on top with a good team performance.

"I thought we dominated the game really well at times, obviously they had a few big players they were able to put the ball in the box to and we just defended really well and the boys up front were able to get the goal, it just helps the team.

On the equaliser, he continued: "It was definitely out of the blue because we were defending well and it was just one of our own players was in the way and it took a deflection off him and went in and obviously that kills the mood but the boys were able to get straight back up the pitch and win a penalty and that's what you have to do.

"It just shows what we've been doing all season, that we know we can come out on top. We've beaten these already this season so we knew we had them and it was just brilliant from the boys to be able to do that straight away."

It's been an impressive campaign so far for North End's youngsters and Nevin is pleased with the progress the squad have made since the start of the season.

"It's been brilliant, we've played really well this season, as individuals and as a team. Everyone is doing their shift in the game and it's just brilliant, it's been a great season. The boys pulled their socks up at the start of the season and we've just been flying from the start.

"The team help me big time and they help me do my part and it makes it easier for me when we're all working as a team. It's just been a great season and I love playing here, it's been great."

The defender joined the club in 2020, signing a two-year scholarship with professional terms to follow at the end of that period, and with his pro contract set to begin this summer, he's made it clear his aim will be to catch the eye of first team boss Ryan Lowe.

"I'm delighted and I just can't wait to take that next step. It's going to be tough, I want to be up there training with the first team and playing regularly in reserve games to try and catch the manager's eye. That's what I'm going to work on in pre-season.

"I just want to play my own game because I know if I play my own game I will definitely perform and I might even catch his eye and that's what I want. If I show him what I can do, I don't see why he can't give me a chance but I'm going to have to keep doing what I'm doing, focus on the game and work hard."