Academy manager Nick Harrison feels the experience of winning league titles is going to stand PNE’s U19s "in good stead" to go on and have successful careers.

Nick’s team, who were crowned champions of the Youth Alliance North West Conference earlier this month, came out 3-2 winners in a crucial Central League game against Fleetwood Town on Tuesday afternoon.

With the Cod Army top of the table at kick-off, the three points for North End meant they swapped position with the home side and therefore finished as league champions.

There could be more to come yet, too, with the Youth Alliance Cup final taking place next week and a Central League Cup final also to be played.

Speaking after the Fleetwood victory, Nick said: “Winning games is a good habit to learn in football.

“Development is great and talking about in possession and out of possession, but at the end of the day football is all about winning games.

“If as a player you can learn to win games and play in the right way – which I thought we did in large parts today – then that’s going to stand them in good stead in their careers.

“They’ve just got to keep going. As I said, football is about winning games at the next level so if they learn to do that and keep going then they’ll be on their way to having successful careers.” 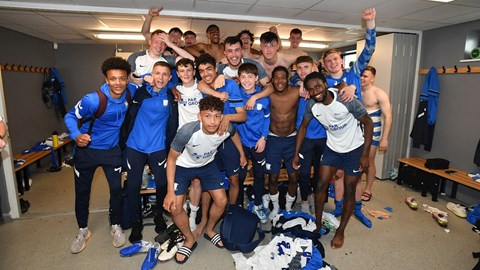 PNE fell behind in the match against Fleetwood Town early on, but after Harry Nevin’s equaliser shortly before half-time, Mikey O’Neill scored a double in the second 45.

There was a late scare, with Danny Edwards reducing the deficit to just one in stoppage time, and he so nearly found the equaliser that would have earned his side the league title with almost the last kick of the game, but goalkeeper James Pradic produced a fantastic save to deny him.

Nick added: “The first ten minutes and the last ten minutes of the game we were under the cosh a little bit, but in the middle parts I thought we created some good chances.

“We started to take control and especially in the second half we made better decisions on the ball.

“I thought we opened them up and created a number of chances, so that’s pleasing because the players took on board information at half-time.

“We knew it would be a tough game, but every credit to our players. They showed great character and great attitude to come back from a goal down again.”

Many first team players have taken part for PNE during the course of the Central League campaign, including Tom Barkhuizen who started and stepped up his return to fitness in the victory over Fleetwood.

Also in the starting XI was 24-year-old Matthew Olosunde, and Nick recognises how important the competition has been for his younger players to earn that experience of playing alongside, and against, professional footballers.

“It’s been brilliant for them,” he concluded. “It’s a great challenge. We’ve got a lot of 16 and 17-year-olds on the pitch today playing against players a lot older than themselves.

“And the fact that they’ve played with two pros today is what the reserves is all about, learning off them.

“Tommy and Matty were brilliant for the younger lads, and I think that’s what this league gives our younger players.”