After PNE were beaten 1-0 by Derby County, manager Ryan Lowe said he’s looking for his side to show “a little more fight”.

After PNE were beaten 1-0 by Derby County, manager Ryan Lowe said he’s looking for his side to show “a little more fight”.

With both teams down to ten men – Liam Lindsay and Max Bird being shown red either side of half-time – it appeared that the game was heading for a stalemate.

But, after Daniel Iversen had made a great double stop, substitute Ravel Morrison popped up in the 81st minute to fire home for the Rams to earn the three points for the hosts.

Speaking to iFollow, Ryan said: “We didn’t really look like scoring. We had a couple of half chances early in the first half and then we sort of make the mistakes in terms of giving cheap corners away. 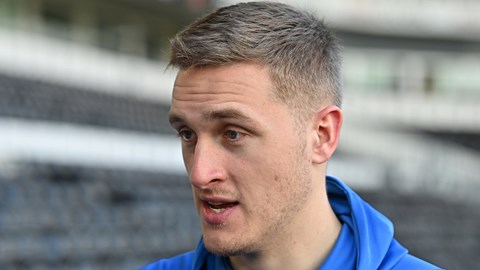 Iversen: “We Didn't Deserve Anything From This Game”

“Daniel has made two fantastic saves to then deny them and we scoop a ball out, not doing our job on the edge of the box, and then the kid comes in and smashes it into the top corner.

“I didn’t see any team scoring really, I thought it was one of them games, but Derby are fighting for their lives and they’ve managed to get a chance and found a way to win, whereas we haven’t found a way to either keep a clean sheet or found a way to score a goal.”

The manager was left frustrated at the nature of the goal conceded, given that his goalkeeper Iversen had pulled off two big saves immediately prior to Morrison’s strike.

“It should be cleared,” he added. “He’s done his job, the lads should be doing their jobs in and around him.

“Unfortunately Browney couldn’t maybe see the ball out, he slipped and he’s chipped it back into play.

“There’s probably no communication to say just see it out, but again the corner we give, [they make] the first contact second contact, and he’s made some good saves Daniel, we can’t allow that.

Up next for PNE is a return to Deepdale on Tuesday evening for a Lancashire derby against Blackpool.

A look towards that game was part of the manager’s message to his players in the changing room after the defeat, highlighting the importance of the fixture.

“I’ve just said to the group in there, it can’t get any bigger,” he said. “It’s the biggest game of the season for the fans and the football club, and I’ve made my players aware of that.

“So we’ll be in tomorrow, we’ll recover tomorrow properly, we’ll be out on the grass, we’ll watch the video footage back of today and we’ll start building up to Blackpool because it’s important we get back to winning ways.

“We’re at home, it’s probably going to be a packed Deepdale, and we’ve got to make sure we put on a show because I won’t be having performances like that where we’re losing games of football.

“I’m not saying they rolled over, but we need to give a little bit more fight and Tuesday night can’t come quick enough.”