Noah Mawene admitted he and his teammates have been waiting for this Friday’s FA Youth Cup tie since the beginning of the season.

Noah Mawene admitted he and his teammates have been waiting for this Friday’s FA Youth Cup tie since the beginning of the season.

PNE’s U18s will take on Rotherham United at Deepdale at 2pm on Friday, looking to progress in the youth level of the world’s most prestigious domestic cup competition. 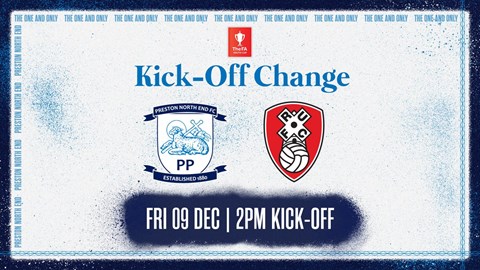 North End were drawn away from home twice last season so, for many of the boys, it’ll be their first opportunity to go and play at the famous home of the first team.

Noah said: “The whole squad’s looking forward to it; we’ve been waiting for it since the start of the season.

“There’s a lot on the line and it’s a big opportunity for us guys to go and perform, especially at Deepdale.

“It means a lot being born in Preston. We’ve got a few lads from Preston, so it means a lot to everyone, especially because it’s the first team pitch so there’s an element of professionalism when you go there, and you’ve just got to stay focused.”

Deepdale is certainly a stadium well familiar to Noah, having grown up coming to North End matches, influenced by his father, Youl – a legend of the club.

“I have not got a clue yet if he’s going to be there or not,” Noah laughed, “we haven’t spoken about it.

“But it does mean a lot when your family’s in the stands and you can see them after the game.

“It’s just a big occasion we all want to perform in.

“I know how much Deepdale means to my father in particular and my family because Preston did a lot for him and he did a lot for the club, so when I come to Euxton and when I go to Deepdale, I always want to try and perform, and I try to give everything I’ve got to the team.”

Noah, now in the second year of his scholarship with the club, and who also holds a professional contract, has spent some time at Euxton with the first team in recent weeks.

The 17-year-old is also a regular for the U19s each weekend, so the midfielder feels he’s getting the best of both worlds by learning from senior players while also getting match minutes.

“It’s a perfect situation for me,” he admitted. “When I come here, I can express myself and ask questions to the senior pros who have been playing Championship games for countless years, so I just need to take in as much as I can and add it to my game and see how I can improve as a player.

“It’s been good experiences. I’m learning something new every time I come up here.

“You can see the difference in the standard, in the levels of training, and with the youth team when I go and play I feel comfortable.

“I feel confident in the players around me and myself.”