Daniel Johnson questioned the amount of added time that was played in Preston North End’s 1-1 draw against Coventry City – as his 89th-minute penalty proved enough for only a point, with Fabio Tavares equalising deep into stoppage time.

An action-packed contest at the Coventry Building Society Arena somehow remained goalless heading into the final ten minutes of normal time, and it was from that point onwards that the key moments of the match occurred. 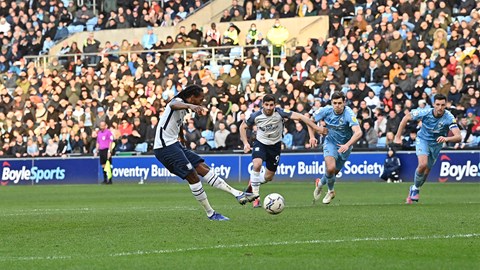 Red cards in quick succession for either side saw Liam Lindsay and then Fankaty Dabo dismissed – the latter’s departure resulting in Johnson’s conversion from the penalty spot – but Fabio Tavares’ 98th-minute equaliser left a bitter taste with it coming beyond the allocated period of six additional minutes.

DJ explained: “I checked in the dressing room after on the Sky Sports app to see how many minutes we played, it was six minutes added on and we ended up playing plus eight. I don’t really understand how that was possible to be honest.

“I think they’re the defining moments in games. When you look at things like that, you’re obviously going to get annoyed, but you think, ‘Hold on a minute, we were meant to play an extra six minutes and we ended up playing an extra eight minutes.’

“In hindsight you could maybe say we could have defended it better, but I think that’s beside the point to be honest, I just think we should have never played an extra two minutes and then it’s a brilliant performance on the road.”

Prior to that crucial moment at the death, Johnson had felt North End had put in another fine away display, with them having looked set for a third consecutive 1-0 win on the road.

“It’s just obvious that we’re a bit down. It’s a point on the road but it feels like a loss and it feels like a defeat because I felt like we executed the game plan brilliantly, first half it took us a little while to get into the game but I think second half there was only one team that was going to go on and win that game. 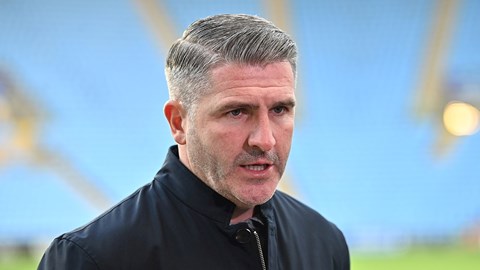 “It’s a brilliant away performance. Especially second half, we dominated the game, we had them penned in their half and it looked like it was only going to be one team to go and win the game. There are no words to explain or sum up today, it’s just one of those things that happens in football.”

The midfielder gave his view on the late penalty decision which saw Emil Riis brought down by Dabo with the Dane having latched onto Johnson’s pass forwards.

“It was a great run from him [Riis], I was just biding my time, waiting for him to get in, get in front of his man, and I was always going to play that across to be honest.

“Obviously I’ve played it for him to go through on goal and get a shot off and maybe score, but he got brought down and obviously we won a penalty. I was always going to step up and take the penalty.”

His successful penalty came in front of the 2,500-plus travelling North End contingent and while he was hoping to have sent them home with all three points rather than one, he explained that the Lilywhites must react positively against AFC Bournemouth next weekend.

“Fans on the road are excellent, they always you give that extra push, that extra ten per cent, and they were outstanding today – thanks to them.

“We’d have liked to have sent them off with three points but today wasn’t the day. I don’t think it was lack of effort, lack of determination or anything like that, I just felt like one, the time, with playing an extra two minutes, and sometimes you can’t really do nothing about it.

“There’s only one way to react from that and that’s to dust ourselves down. We have a free week this week to work on a few things and then obviously try to execute a game plan for the Bournemouth game coming up.

“I think it’s about going home and spending time with your family, getting away from football a little bit, taking your mind off it a little bit, and then obviously getting back to work in the week coming.”