Hughes: “A Perfect Away Performance”

The Welshman was unfortunate not to score one of his own in the first half when his header rebounded off the crossbar, just one of a decent number of openings for the visitors throughout the contest in East Yorkshire. 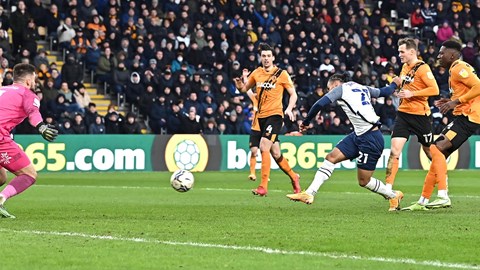 But the defender was pleased  to get the win, as well as a third consecutive clean sheet on the road, which he confessed is a confidence-booster for him and his team-mates.

He told iFollow PNE: “It’s a perfect away performance. It’s a few clean sheets in a row now so it’s giving the defenders a lot of confidence and giving the strikers the chance to go and get that winning goal.

“You automatically think you want to go into the next game and try to extend that record. That’s definitely our aim as defenders going into the next game like what we did with Cam today. We were probably unlucky to go in at half-time 0-0, but we got the job done in the end so everyone’s pleased.

“We always knew the game plan. We just had to stay calm and just keep doing what we were doing first half.

“We created chances but equally we had to shut the door on them because they created some chances too. It was one of them games where it frustrated you at times and in spells it wasn’t very pretty but everyone’s happy today and that’s all that matters.”

Hughes has been impressed by Archer since his arrival and agreed his goal came at the ideal time, with Alan Browne having had a goal disallowed for handball just moments earlier.

He added: “It couldn’t have come at a better time really. It’s probably unfortunate that that goal got disallowed but it’s a great response to go and get the goal a few minutes after.

“He’s been really good, really impressed. I think the gaffer was saying he hasn’t had much game time and from what we have seen of him, he’s hit the ground running, so yeah, really good.

“They [the fans] were unbelievable. I think for Cam to get his goal where our fans were again was an amazing moment for him, I think his family were there as well, so credit to him.”

North End still have just one league defeat to their name since Ryan Lowe’s arrival as manager, despite the continued intensity of the fixture schedule.

Hughes said he enjoys the opportunity to pick up where he has left off after a win, though, and with another win providing a further platform to climb the league table, he has his sights sets on the Play-Off places.

“It just gives us a stepping stone going into Wednesday. It’s a home game in front of the fans and again we’re going to try to win the game.

“If you keep building momentum and keep picking up points, especially back-to-back wins, then it can slingshot you up the table. That’s our next aim.

“There’s still a long way to go and we’ve got the games to get in the Play-Offs. We’ve just got to keep our heads down and just try take each game, game-by-game, and see where we go.

“For me personally, I quite like the quick turnarounds, because if you lose a game, you’ve got another game to put it right, and if you win a game like today, it’s like, ‘Right, bang, Wednesday, let’s try and win another one.’

“The only downside is it does take its toll on your body recovery-wise and stuff like that, but we’ve got a big enough squad and everyone’s ready to roll. Personally, I’m happy with that.”

With a strong travelling contingent of North End fans again backing the Lilywhites on the road, Hughes praised the away following inside the MKM Stadium.

“It’s our acknowledgement to the fans; they pay their hard-earned money and they travelled all this way down to come and support us. I think a 20 or 30-yard walk over to the fans to give them a clap and say, ‘Thank you,’ that’s nothing. We appreciate them coming.”