Lindsay On Having ‘A Mountain To Climb’

Liam Lindsay suggested Preston North End were left with too much to do as they were unable come back from a three-goal deficit against Reading – admitting they had ‘a mountain to climb’.

Liam Lindsay suggested Preston North End were left with too much to do as they were unable come back from a three-goal deficit against Reading – admitting they had ‘a mountain to climb’.

The No.6 came off the bench to bring about a formation change with ten minutes of the first half remaining, at which point Lucas Joao’s brace had put the hosts on the back foot, with another strike from John Swift early in the second half sealing the Lilywhites’ fate – despite goals in reply following from Daniel Johnson and Cameron Archer. 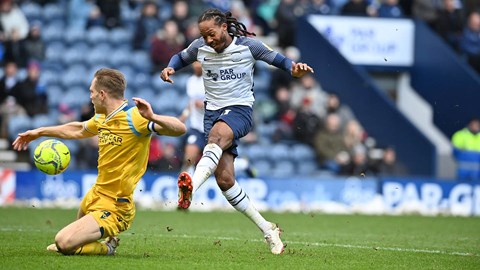 Speaking to iFollow PNE, he said: “It’s a tough one. At the start of the game, it’s a mountain to climb and we had a lot to do second half and we just couldn’t quite do it.

“We got two goals, obviously you need to keep them out at our end, but we didn’t even play well today and scored two so you just need to take positives .

“It wasn’t good enough, the manager has got high standards and we weren’t at those standards. We got told, simple as that, we got told, and we had to make it up in the second half. We played better but we didn’t do fulfil our points.”

Lindsay felt the first goal in the second half was crucial – and with Reading the side that ultimately got it, to extend their lead to three goals at the time, he felt the game might have panned out differently had the Lilywhites been the side to have scored at that point.

“I think the first goal is crucial in the second half and obviously we didn’t get it. [If] we get the first goal and it’s 2-1, they’re in a tough position in the league, so things can turn pretty easily, but they got it. From then it’s an uphill battle.

“We’ll debrief it tomorrow and as always look to see the positives and the negatives. It was disappointing to lose that goal and we need to be better in the next game.”

The defender admitted it was a tough situation to come into the game while the side were 2-0 down as he replaced Brad Potts, with a switch to a four at the back ensuing as a result.

“I had to come on and do a job. It didn’t end well but we just need to look forward to the next game.

“It’s tough, it is obviously tough 2-0 down. The damage is kind of done. We got two goals, obviously, you keep them out at our end but we didn’t even play well today and scored two.

“I had to go on with confidence because I played a few weeks ago against Millwall, got a good 90 minutes in, so I’m just ticking away in training and coming on I felt good, I felt fit, so I just need to keep going in training.”

There was also perspective from Liam though as he pointed out the need for North End to go again and look to get back into the positive form they have displayed in recent times, with this defeat halting a six-match unbeaten run in the league.

“The manager touched on it after the game as well that it’s one defeat out of however many of our games and we just need to look up. We’ve got a game straightaway after on Tuesday so we just need to go out and do it, look at the positives.”