Alan Browne said he and his Preston North End team-mates were ‘over the moon’ to come back from two goals down with a one-man disadvantage and claim a last gasp 2-2 draw against Sheffield United at Deepdale. 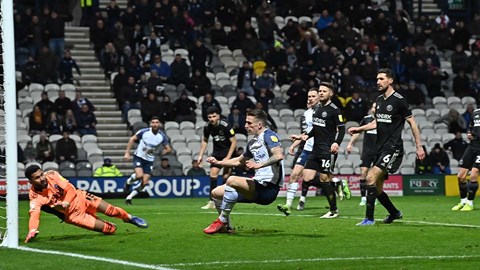 After first half goals from Jayden Bogle and Billy Sharp – the latter’s coming from the penalty spot after Andrew Hughes was adjudged to have committed a red card offence – Browne spearheaded the second half comeback with a 71st-minute reply before Emil Riis earned the point in dramatic style with an equaliser two minutes from time.

Speaking to iFollow PNE after the game, the skipper said: “I think we’re over the moon considering what happened first half. Backs against the wall, 2-0 down and a man sent off and I think to a man we really rolled our sleeves up and stepped up second half and that’s what we need right from the off.

Unfortunately, we got off to a bad start today but we managed to rectify it and in the end it’s a fantastic point.

“Team spirit here has always been a massive thing for us. We really showed it today. Scotty had to sacrifice himself early doors, it’s obviously disappointing for him, he’s in from the start tonight and it just shows the togetherness of everyone coming on.

“Nobody’s sulking and we just grinded, put in a real shift and I think the fans could see that, could see how much we were trying and really got behind us. There’s a real togetherness about the place now.”

The Republic of Ireland international felt going down to ten men kicked North End into gear with the visitors having gone two goals ahead after just 38 minutes.

On the red card, he said: “From our side of things, I think it was probably a good thing, the sending off, because it’s a wakeup call. Before that we were way too deep and just let them have the ball, we were showing them too much respect and we end up going down to ten.

“Sometimes you can roll over and take the defeat but we’ve been trying to stick in the game, we knew we’d get a chance and I took it when it came.

“I think we were comfortable when we went down to ten. It’s not something you want, but I just think we needed that wakeup call and it was a case of who’s going to step up then.

“I think to a man, subs included, everybody really dug deep, put everything into it and I think the point is the least we deserved and we probably could have nicked it at the end. I think the point’s probably a fair result.”

The Lilywhites remain unbeaten in the league since Ryan Lowe’s appointment as manager last month and Browne feels his arrival has created unity within the club and fanbase.

“Since he’s come in, the gaffer has really got them [the fans] on our side. He wants that togetherness, not just in the dressing room, but around the club as a whole and I think you can see them getting really right behind us.

“They turn out in their numbers, really loud and proud, and that’s what we needed. We’re really doing our best to put performances in to match it on the pitch and hopefully we’ll keep getting results.

“Obviously, we’d have preferred the three points, but given what happened, you take a point and you move on. I think we’ve had some tough fixtures and managed a couple of points since the gaffer’s come in.

“We’re still a long way off where we want to be but I do think we’ll get there. You can see what we’re trying to do and hopefully we’ll get the results to match our performances.”

Watch the skipper’s post-match thoughts in full by clicking on the video above.