Preston North End are delighted to confirm striker Cameron Archer has joined the club on loan from Aston Villa.

The 20-year-old, who has featured three times in the Premier League for Villa this term, will stay at PNE until the end of the current campaign.

Cameron has enjoyed a breakthrough season at his boyhood club, scoring regularly in all competitions and he has recently put pen to paper on a new deal at Villa Park until 2025.

Speaking after joining PNE, Cameron said: “I’m excited, I’m ready for the challenge and can’t wait to get started.

“It’s been a good journey so far and I’ve had the opportunity to go out on loan now to express myself.

“[My aim is to] just hopefully get some experience, some games under my belt and hopefully score some goals.” 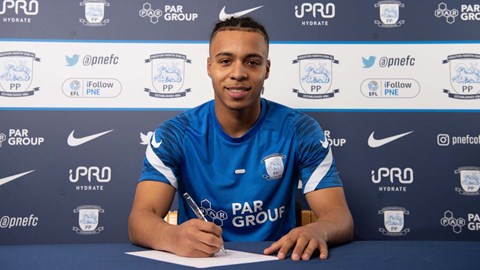 The young striker is very highly rated by Villa boss Steven Gerrard, having been kept at the club until now to contend with the likes of Danny Ings and Ollie Watkins up top.

As well as being involved in Premier League and Carabao Cup matchday squads, the Walsall-born man has also been in top form in the EFL Trophy, scoring six goals in just four appearances.

On the latest addition, manager Ryan Lowe added: “We’re absolutely delighted. I’ve been monitoring Cameron Archer for a while now.

“He’s a natural goalscorer who I’m really excited to work with and hopefully he’ll score some goals for us.

“There were several clubs after him chasing his signature but we’re the privileged ones to be able to take him.

“His objective will be to play for the Aston Villa first team in the future and we want to help him do that, but his objective now until the end of the season will be to help Preston North End finish as high up the table as possible.”

Cameron will take the No.21 shirt and will go straight in to contention to feature on Wednesday evening as PNE take on West Brom at The Hawthorns.