Ryan Lowe has asked for his Preston North End side to believe they can get to where they want to, and feels they are now showing signs of doing so after an impressive 2-0 away win against West Bromwich Albion.

Ryan Lowe has asked for his Preston North End side to believe they can get to where they want to, and feels they are now showing signs of doing so after an impressive 2-0 away win against West Bromwich Albion. 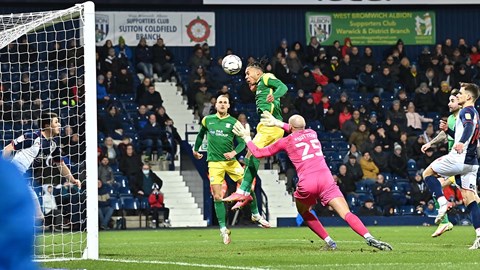 Emil Riis put North End ahead just before the break and debutant Cameron Archer later made sure of the points as he headed home with just under 15 minutes remaining at the Hawthorns.

Speaking to iFollow PNE after full-time, Lowe spoke of urging his players to show no fear when visiting the likes of West Brom, as they look to achieve aspirations of their own in climbing the Championship table.

The manager said: “We’ve said to the group to start believing where we want to try and get to. We respect West Brom for where they’ve been in the Premiership and up and down and they’ve got some fantastic players and their fanbase is great.

“They’re trying to get back up to the Premier League. But you can’t just come to these places and fear them, you’ve got to respect them, but you can’t fear them. You’ve got to go toe-to-toe with them.

“I said to the group before the game that sometimes these places can be intimidating to come, but I don’t want my lads to be. I want them to go out there, they’re good footballers, and showcase what they’re about. They certainly did that tonight.

Lowe was pleased with his players’ execution of their game plan in overcoming Valerian Ismael’s outfit in the Midlands.

“I’m obviously pleased,” he added. “A fantastic performance. I thought the lads took to the game plan really well and scored some good goals; to come away from West Brom with three points and a clean sheet is really pleasing.

“I think the game plan went to fruition, I thought it was spot on, every single one of the players stuck to the game plan.

“We worked some good openings, we turned them a little bit earlier than normal and we felt if we’d get the ball up the top end of the pitch, we’d get chances.

“We moved Alan round a little bit and he was very creative in there. We countered them a couple of times. The two goals we scored are fantastic. To limit West Brom to no shots on target just shows that we were definitely worthy of the three points.”

Having brought in Aston Villa frontman Cameron Archer in on loan just two days ago, the exciting youngster took just 11 minutes to get on the scoresheet for Preston North End, and Lowe was full of praise for his new No.21.

“We’ve only seen him for two days really but I know what he’s about, that’s why I’ve signed him, I haven’t just plucked him out of the sky and gone, ‘Yeah, he’ll do.’ I’ve took him in because I’ve seen him, I’ve monitored him for a while, with the relationship with me and Stevie [Gerrard, Villa manager].

“I thought the build-up to it, we’ve intercepted a sloppy pass from there and we’ve gone and Al’s slid Greg up, our wing back high up the pitch, which you want. He’s had a shot, it’s ricocheted out and Cam’s in the right place to score a goal, in between the goals. As any striker will tell you, if you’re in between the goals, you’ve got a chance of scoring.

“I’m pleased for him, a lot of his family were here tonight, really pleased for the kid, he’s going to go home with a goal on his debut for Preston North End and long may that continue.”

Lowe enjoyed another special moment with the travelling North End supporters at the full-time whistle in celebration of such a fantastic result and he feels the increasing belief of his playing squad is now being felt among the fanbase, too.

On the away support, he added: “It was brilliant, fantastic. I said to the lads on the touchline, ‘The fans haven’t stopped singing!’ That’s credit to them because that’s what we want.

“We want to try and finish as high as we possibly can in the division, we never get too high and we never get too low. But when we’re putting on performances and the fans, roughly 2,000, 1,800 fans, are travelling in their numbers, we’ve got to make sure we send them home happy and that’s what we’ve certainly done.

“I’m sure a few of them will be going to work tomorrow with lost voices, won’t they? A little bit like myself! Fair play. They keep supporting us through thick and thin and we’ll hopefully keep trying to get the points.”