Ryan Lowe believes he is seeing 60% of what he wants from his team, and is confident that they can keep on improving, after they were pegged back by a late goal in the 1-1 draw against Birmingham City.

Ryan Lowe believes he is seeing 60% of what he wants from his team, and is confident that they can keep on improving, after they were pegged back by a late goal in the 1-1 draw against Birmingham City.

Patrick Bauer made a slight touch on Alan Browne’s shot to give North End a first-half lead, in what was a dominant opening 45 minutes from the hosts, but Scott Hogan’s goal four minutes from time limited them from registering another three points to just one instead. 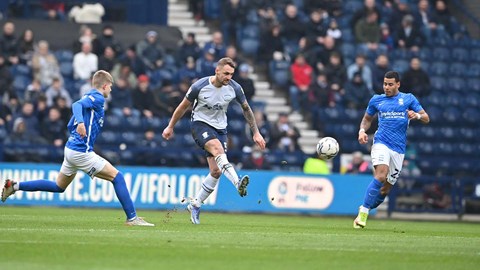 Having taken charge last month and overseen two wins from his first two league games, Lowe has been pleased with the progress his players are making in adapting to his style, but is aware that there is further room for improvement.

He told iFollow PNE: “It’s definitely frustrating because I thought we could have seen the game off at 1-0. We had a couple of great opportunities, we countered them quick, we were in the final third and just that last little pass, that creative pass, and that killer pass, that just sees it off.

“We didn’t quite have that. There were some good passages of play, possession-wise, we were good, getting on the ball in final third we were okay, we had some shots on target. We would have liked to have worked the ‘keeper a little bit more. We’ve seen in the Championship that 1-0 is never enough, is it?

“I just thought late on in the game, we were dropping a little bit deeper and forced them to go long a little bit quicker, the distances weren’t quite right. We always knew they were going to be a threat and we thought we could withstand it a little bit, but we didn’t get close enough to crosses to stop the cross coming in towards the end.

“I was definitely frustrated because I thought we would have seen the game off and potentially got another goal.”

The gaffer felt his team required some more creativity in the final third of the pitch.

“It was the one pass or the killer pass, wasn’t it? We said to that the group. We’ve said that we’re probably 60% of where we want us to be and 60%, to get seven points out of a possible nine is very good. But I want to be better, I want to get nine points out of nine and 12 out of 12 and continue that.

“What I will say is the lads are trying and they’re working their socks off every day in training and we’ve got to bring that to fruition on a matchday. We’re seeing about 60% of it. It’s a different style, it’s a different philosophy, but when they get it, it looks good, doesn’t it? 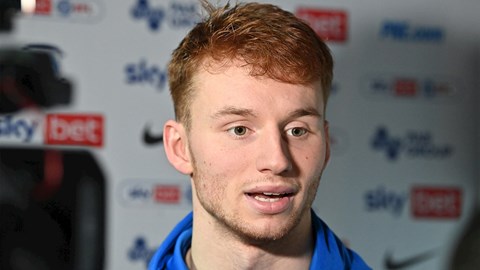 Sepp Disappointed With Second Half Performance

“When it gets a bit scruffy, when they’re not doing the right things and maybe going through the middle when we should be going around the outside, and then not dealing with some balls that have come in the box, it looks frustrating, and it certainly was.

“But on a positive note, we’ve got a lot of games coming thick and fast, it’s another point, we wanted a win to get three points to send the fans home happy and ourselves home happy but it wasn’t to be, but it is another point in the right direction.

“We got up the top end of the pitch a bit but then we didn’t have that killer, ruthless instinct of finding a wing back, or a low cross into the box, or that little touch or bit of cuteness and cleverness in and around the edge of the box. We scored a decent enough goal, I think Pat ended up touching it in.

“We always felt that if we could do that and break their lines, we’d be fine. Second half we wanted to do that a bit more and then it was the pass selection in the second half that wasn’t quite right because we’d come inside instead of going outside.”

While disappointed to concede late on, Ryan is looking for his side to put things right – with them having an opportunity to do so immediately, with Sheffield United the visitors at Deepdale next up on Tuesday night.

“Goals are goals, whether they come early or late. It’s disappointing when you concede a goal, but what we’ve got to do is make sure we’re right and ready for next time. It’s a good point, we want three points, but it is seven points out of nine.

“We always knew Birmingham the type of threats they can pose and we’ve got to deal with that. Sheffield United will pose a different threat on Tuesday night and then Swansea the following Saturday, so we’ve got to make sure we’re ready now.

“We’ll put the game plan together with the boys tomorrow morning, we’ll get them recovered, we’ll do the work Monday and then we’ll go toe-to-toe again Tuesday night.”

Watch the boss’ post-match interview in full on iFollow PNE.