Ryan Looking To Start On Front Foot Against Robins

Ryan Lowe is looking for his side to start on the front foot on Saturday afternoon when Bristol City come to Deepdale.

Ryan Lowe is looking for his side to start on the front foot on Saturday afternoon when Bristol City come to Deepdale.

PNE return home following two away trips in the last week, firstly to Swansea City before taking all three points against West Brom at The Hawthorns.

The North End faithful who made the journey to the West Midlands were in fine voice all evening and the manager is hoping his side can give them more to get behind this weekend.

He told iFollow PNE: “They were excellent on Wednesday night, singing from start to finish.

“We’re hoping they’ll do the same, but we’ve got to make sure we give them the noise.

“We’ve got to start well, start on the front foot and get after Bristol City when we need to, and we’ve got to work some patterns of play, play some good football and give them something to shout about and that’ll be the message.”

The Robins arrive at Deepdale sat 16th in the table, with Nigel Pearson’s side having struggled for consistency so far this season. 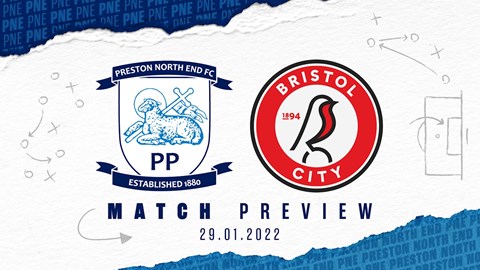 With the likes of Andreas Weimann in attack – the division’s fourth highest goalscorer – there is certainly not a lack of quality in their squad.

Ryan said: “Nigel Pearson’s a good bloke first and foremost. He’s a good manager, he’s been there, seen it and done it.

“He’d like to be in the upper echelons of the division where Bristol City would like to be themselves, but they’ve still got some fantastic players.

“Their results have been a little bit indifferent over the course of the year, but what we’ve got to do is worry about ourselves.

“We’ll pay them the respect they deserve and it’ll be about what Preston North End do on Saturday afternoon, because we know it’s going to be a different type of game than what the games have been in the last few weeks.

“They’ve got some good attacking players, so we’ve got to make sure we’re on it.”

North End come in to the game after keeping their first clean sheet since the end of October on Wednesday night, as they limited West Brom’s forwards to very little.

The manager admitted clean sheets are something he is looking for more of, and there have also been other aims set internally.

“If you have all these things then you’re certainly going to be better equipped and they’re the messages to all the lads.

“Clean sheets, more goals, more set piece goals, more possession and nine times out of ten if you’ve got all them you’re on to a winner.”

Hear more from the boss in his full interview on iFollow PNE.