Ryan Lowe was disappointed to see a late goal knock his Preston North End side out of the FA Cup, especially given that progression to the next round would have set up a tie against Liverpool at Anfield.

Ryan Lowe was disappointed to see a late goal knock his Preston North End side out of the FA Cup, especially given that progression to the next round would have set up a tie against Liverpool at Anfield.

PNE looked to be heading into a penalty shootout away to Cardiff City, with the game at 1-1 after 90 minutes and was seemingly even in extra-time, but a late Mark Harris goal won the Bluebirds the game.

Speaking after the match, Ryan said: “It’s always tough when you concede a late goal. I thought both teams were lagging a little bit in extra-time.

“I thought both teams were probably going to settle for penalties. We had a few knocks, bumps and bruises along the way, people just hanging in there. 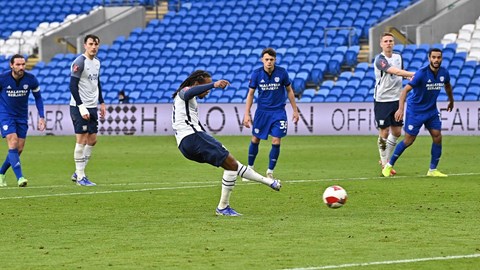 “But [there was] just a lack of decision making in that last goal really which could have helped it not go in.

“When it comes over the top, we could head it out for a throw or back to the ‘keeper. We’ve headed it down and they’ve jumped on it and then we’ve made a last-ditch challenge, so you’re always disappointed when you concede a goal late on, it’s no different in the FA Cup.

“So yeah I’m disappointed, but it’s football isn’t it. We gave it our all, tried to make a few changes to freshen it up, but what we’ve got to do now is recover the group properly and move on to Saturday.”

PNE fell behind just before half-time, before Sean Maguire won a penalty for his side just short of ten minutes into the second period, with Daniel Johnson stepping up to slot home the spot kick.

That goal meant that in all three of Ryan’s games in charge, his side have responded with a goal after conceding, although Mark Harris’ 116th-minute strike came too late for North End to fight back.

“They’ve been fantastic in there [the dressing room]. Their heads are on the floor a little bit and I’ve had to pick them up to say don’t worry, it’s how we react now from this loss.”

The squad and the backroom staff were disappointed enough to be exiting the competition, but the news that a fourth round tie at Anfield would have followed no doubt made it harder to take, especially for the gaffer who is a big Liverpool fan himself.

“It’s a bitter pill to swallow of course." he admitted. "I’m a mad Liverpool fan.

“I said to the group in there beforehand let’s go and have a day out somewhere in the fourth round. A lot of them lads played against Liverpool not long ago but I haven’t, but look that’s football isn’t it. I did say I don’t have that much luck in the FA Cup!

“It’s not nice when you told me before, I thought you were taking the micky out of me but that’s football isn’t it, and good luck to Cardiff against Liverpool in the fourth round, I’ll probably be there!”

For PNE next, it will be back to league action on Saturday when Birmingham City come to Deepdale, as Ryan and his side go in search of a third successive Championship victory.

“We’ve been on a fantastic run, I know we’ve only had two games in the league, but we’ve got to now get back to that.

“Get back to freshening the group up, get back to putting a game plan together for the group and we’ll do that on Tuesday.

“We’ll give them a rest day and then we’ll have two days build up for Birmingham at home which is going to pose a different type of football match than other teams have done.

“They’re a little bit different at the moment, and they’ll want to get their season back on track as well and start picking up results so we’ve got to make sure we’re ready for it.”