Ryan: “What A Fantastic Reaction”

Ryan Lowe was pleased with his side’s “fantastic reaction” to rescue a late point against Bristol City, but he admitted the first half display was not acceptable.

Ryan Lowe was pleased with his side’s “fantastic reaction” to rescue a late point against Bristol City, but he admitted the first half display was not acceptable.

Preston North End found themselves a goal down inside 12 minutes and they struggled to get in to a rhythm in the first period, before coming out in the second half and equalising in the early stages through Emil Riis.

After falling behind for a second time, the Danish forward stepped up again to fire home an incredible volley to earn his side a point in the fifth minute of stoppage time.

Speaking to iFollow PNE, Ryan said: “First and foremost the first half wasn’t acceptable; we know that. 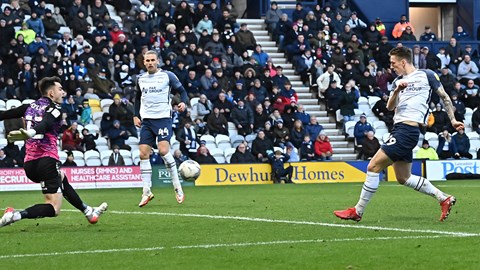 “We spoke to the group about that at half-time. That’s not us so that’s a bit of a blip in terms of how we’ve been.

“They know the standards they’ve set have been very high, but what a fantastic reaction. We made a couple of changes at half-time, we wanted to be on the front foot a bit more, we tweaked the formation a slight touch and we went out and got some goals. That’s what we wanted to do.

“We freshened it up and we needed to make sure we were on the front foot a little bit more.

“The first goal [came from a] great effort from Cam [Cameron Archer] and Emil’s there to follow it up, and then it’s a fantastic second goal. That should be your winning goal, that.

“It doesn’t feel like a winning goal but it definitely feels like a good moment because these lads – their application, their attitude and their desire to never say never has epitomised them today.”

Emil’s second strike – his 16th of the season in all competitions – was the second time within the space of two weeks that he's earned a last-gasp point for PNE, having equalised late on against Sheffield United earlier in the month.

Saturday’s volley earned his side the point which extended Ryan’s unbeaten start at Deepdale during his time in charge so far to four games.

He said: “If they were winning goals they’d make a lot of difference. Look we haven’t lost here yet at Deepdale, so we want to continue that.

“It all makes a big difference, doesn’t it? The confidence in the group is very high, it’s good. The belief is there, but what we’ve got to do is see games a little better in terms of what we want to do.

“We need to be scoring goals first rather than coming from behind. It’s always nice when you don’t lose games, but ultimately we want to win more than we lose or draw.”

Hear more from the gaffer in his full interview on iFollow PNE now.