Andrew Hughes described the Preston North End fans as “unbelievable” for their support during the friendly against Getafe in Campoamor.

Several hundred of the North End faithful were stood pitchside as Ryan Lowe’s side took on the La Liga team.

As kick-off was approaching, there was already a good number of fans on site, but hundreds more filtered in when the supporter-organised coaches turned up from Benidorm.

Speaking about that support, Andrew said: “Unbelievable. I thought that was it at one stage and then I saw a whole army of PNE fans marching down the hill again. That was good. 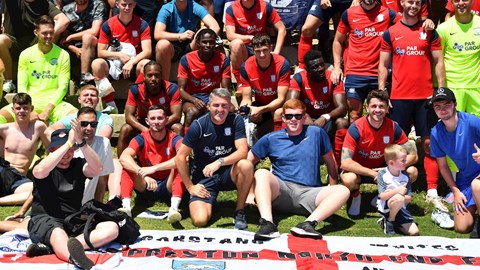 “Fair play to them, the support was unbelievable today.

“To make that trip was really, really good.”

PNE did end up losing the game 2-1, but were ahead inside two minutes, and Hughes – who played as a left centre back for the opening hour – feels he got the last touch on the ball as it went over the line, despite claims from Ryan Ledson.

The friendly came on day four of the training camp, following three days of tough work in the intense heat.

There’s now only a couple of days left, with Wednesday a free day for the players to enjoy some downtime, while Thursday will see the lads take on more training.

“It’s been tough, but enjoyable at the same time,” Hughesy added. “That’s what these camps are for, togetherness, to put the hard work in for when we go back and to obviously get the warm weather training, so it’s been really good so far.

“I think hot weather training is definitely a positive so hopefully when we get back to the training ground back home we’re not breathing too heavily.”