James Pradic is looking to learn as much as he can at Preston North End after signing a professional contract at the club.

James Pradic is looking to learn as much as he can at Preston North End after signing a professional contract at the club.

The 17-year-old goalkeeper has put pen to paper on a two-year deal at Deepdale, with the club having the option to extend for a further year.

Having only joined North End a year ago following his release from Charlton Athletic, he admitted he never could have imagined he'd be in this situation. 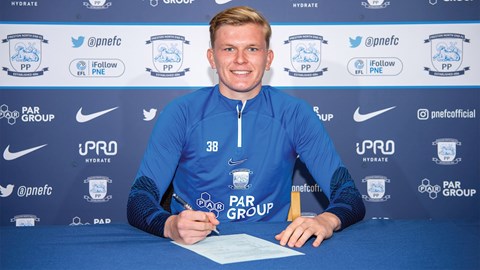 James told iFollow PNE: “I’m very, very pleased to get it signed. I’ve only been here for a year so to sign it in the first year is really good.

“I understand, I know my position in the club. Obviously play time for a third choice ‘keeper is not always guaranteed, but obviously I’ve got the Academy games and the reserve games so I’m really looking forward to this year.”

James has been with the first team during all of pre-season, training alongside Freddie Woodman and Dai Cornell, and working under goalkeeping coach Mike Pollitt.

Having only turned 17 earlier in the month, there is still plenty of time for James to learn and adapt his game, and he’s willing to take on advice from those around him.

Wales U17 international James played lots of minutes during the 2021/22 season for the U19s, playing a key role for the side which won the league and cup double, as well as the Central League title.

Not too many players are lucky enough to play so many minutes as a first-year scholar, but the goalkeeper soon showed his ability with the youth team.

“It probably was one of the best years in my football career because we did the treble so it was really good to be a part of that.”