Ryan Lowe felt his side played some “fantastic football” in the penultimate game of pre-season as PNE came out 2-1 winners over Hearts.

Ryan Lowe felt his side played some “fantastic football” in the penultimate game of pre-season as PNE came out 2-1 winners over Hearts.

A goal from Ben Woodburn – who spent last season on loan with the Jam Tarts – and a second-half strike from skipper Alan Browne earned his side the victory at Deepdale.

Having finished third in the Scottish Premiership in 2021/22 and earned themselves a spot in European football for the upcoming season, Hearts are a good footballing side, and one Ryan was impressed with on the night.

On his own side’s performance, he said: “I’m really pleased with them. I thought they played some fantastic football, some end to end.

“I thought they were fantastic as well. They equipped themselves well, I thought Robbie [Neilson] has got a good bunch of lads there playing the right way. 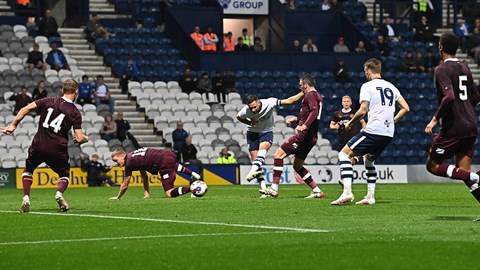 “They caused us a few issues, a few problems at times, so really pleased.

“The result’s the result, but ultimately it’s about getting more minutes into the lads and getting the fitness into them, and I’m really pleased with the outcome as well.”

Since being appointed as manager, Ryan has spoken openly about his desire for his midfielders to push forward and get involved in North End’s attacking play.

That certainly happened on Wednesday evening, with both Woodburn and Browne arriving in the box from midfield to score their goals.

Ryan said: “I want my eights getting on the end of crosses or pullbacks, whatever it is.

“I thought Ben [Woodburn] took his goal fantastically, Pottsy with a great pick-out. Then Browney who’d just come on, it was probably his first or second touch, and he’s rolled it into the bottom corner.

“I’m disappointed with their penalty obviously [to make it 1-1], but fair play to them, they played some good stuff and got themselves in positions to cause a few problems.

“Overall I’m pleased with how we’ve gone about our business against a decent team.”

Up next for PNE is another home game on Saturday, this time against Premier League side Leicester City.

That will be the final chance for the players to stake their claim in match action to force their way into the team for the Championship opener against Wigan Athletic a week on Saturday.

Ryan added: “I’ve been pleased with all the players. I don’t want to single anyone out, but there’s a few that have stood up and been counted for and shown me something a little bit different which is a good thing for me to have.

“But come Saturday afternoon at five o’clock I’ll hopefully have a big headache for selection for the following week.”