Preston North End will start the 2022/23 Championship season with a local derby, making the short journey to face Wigan Athletic.

Ryan Lowe will take his side to the newly-promoted Latics on the opening day of the campaign on Saturday 30th July for the first of eight derbies to take place during the season.

North End will then return to Deepdale on Saturday 6th August to take on Hull City for the first home game of the season, as was the case last term.

PNE will face Burnley for the first time since 2016 on Tuesday 13th September, facing the Clarets at Deepdale.

The next derby will then take place at Bloomfield Road, with North End set to face Blackpool away from home on Saturday 22nd October.

A trip to Ewood Park to play Blackburn Rovers will follow on Saturday 10th December, the game which will resume Championship action following the break for the World Cup.

Boxing Day will see PNE host Huddersfield Town at Deepdale, before a double header on the road around the New Year period, which will start with a visit to West Bromwich Albion on Thursday 29th December before facing Stoke City away on Sunday 1st January.

The first Lancashire derby of 2023 will take place at Turf Moor on Saturday 11th February, before Wigan Athletic come to Deepdale later that month on Saturday 25th February.

Blackpool will then visit Deepdale on Saturday 1st April, a month of seven games which will see the Lilywhites head to Queens Park Rangers on Good Friday before returning home to play Reading on Easter Monday.

The final derby of the campaign will take place at Deepdale, with Blackburn Rovers coming on the penultimate home game of the season on Saturday 22nd April.

North End’s final away game of the campaign will come against Sheffield United at Bramall Lane on Saturday 29th April, before ending the regular season on Saturday 6th May against Sunderland.

You can find the full fixture list by clicking here.

Please note, all fixtures are subject to change. 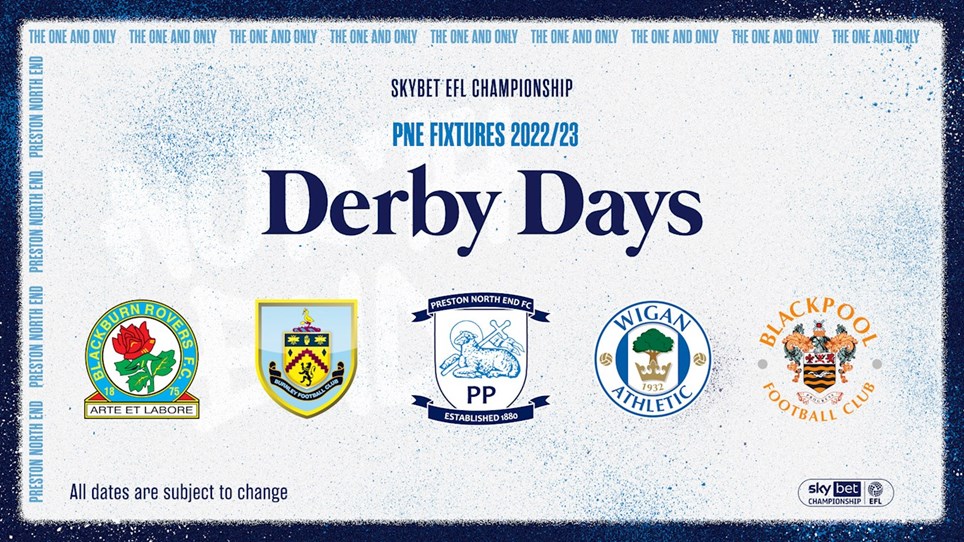 
Burnley’s relegation from the Premier League and Wigan Athletic’s winning of League One means Preston North End will face four fellow Lancashire sides during the 2022/23 season.


Preston North End will find out their Carabao Cup first round opponents on Thursday 23rd June.