Preston North End manager Ryan Lowe apologised to the club’s supporters after his side were beaten 4-0 by Luton Town in their final match before the international break.

Preston North End manager Ryan Lowe apologised to the club’s supporters after his side were beaten 4-0 by Luton Town in their final match before the international break. 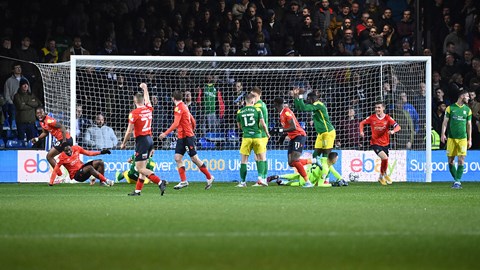 The Lilywhites were three goals behind going into half-time, with a Luke Berry brace coming either side of Peter Kioso’s strike, and went further behind in the second half through an unfortunate Bambo Diaby own goal.

After confirming that North End’s travelling supporters would be reimbursed the cost of their match ticket following defeat at Kenilworth Road, Lowe shared his post-match thoughts with iFollow PNE.

He said: “First and foremost, I just want to apologise to the fans because that’s not what I was brought in to do. I was brought in to give them some good times back and get my team to play the way they want them to play, which in all fairness, they’ve done for large parts of games and since I’ve been here that’s hopefully a one-off. A bad day at the office.

“We’ll reimburse the fans their money back because it’s their hard-earned money, they’ve travelled away on a cold Wednesday night and they’d have been better watching a Sunday league game because that was nowhere near good enough for what we want to do.

Lowe revealed that he had considered a couple of changes to the starting line-up rather than just the one that was ultimately made, with Ali McCann coming in for Liam Lindsay, but stressed that he hadn’t forecast such a disappointing display from his team.

He added: “I didn’t see it coming at all. I was contemplating freshening it up a little bit and maybe making one or two changes more than I did and I just felt that Luton are a good team and they’ll find a way

“The turnovers for the goal, the first one we’ve given the ball away and then we’ve allowed a cross to come in and not dealt with it, it’s ricocheted down.

“Then a free-kick, wide free-kick, which we haven’t picked up around the back, and then the third one was sort of a little backheel and it’s just gone in at the near post, it was like a cartoon goal or something off the TV, it was embarrassing.

“The fourth one sums us up, Daniel [Iversen] punches it when he can catch it and it hits Bambo in the head and goes in. The goals that we’ve conceded there tonight were very, very messy and not very good. Did I see that coming? I certainly didn’t. But it’s there, it’s happened, we’ve just got to make sure we put it right.

“Even when they scored the early goal, through our fault, I’m thinking we can get back in the game, it’s happened to us before. But today I just thought we had definitely a lack of quality, a lack of urgency, a lack of knowhow, a lack of game management, they fought for every first and second ball, we were a little bit off the pace – well, a lot off the pace.”

There is now a two-and-a-half-week break until North End return to Championship action with a trip to Derby County to kickstart the month of April.

While the gaffer hoped another outing could have come sooner to move on from the Luton defeat, his sole focus is now on putting things right when that trip to Pride Park does come around in a few weeks’ time.

“I wish we had a game now Saturday to try to put it right, we haven’t, but what we’ve got to do now is rest the lads because they deserve it and they’ve been fantastic so far until tonight and we’ll get ready for the next one and hopefully we can put it right.”

Watch more from the manager on iFollow PNE.