The Lilywhites endured a miserable opening 55 minutes, going a goal down, missing a penalty and losing Teddy Mfuni, Noah Mawene and Lewis Leigh to injury.

As skipper, Nevin played a big part in his teammates rallying themselves and eventually winning by a very comfortable scoreline. 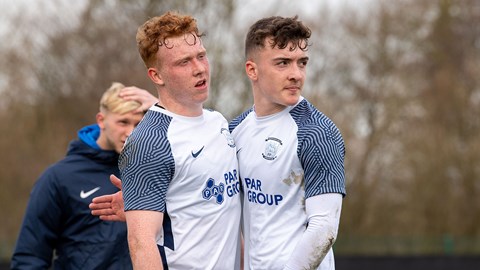 “It was absolutely brilliant from the lads,” said the centre back.

“We played well in the first half, things just weren’t going our way in front of goal.

“We had a penalty saved, we hit the post and probably should have had another penalty.

“But the lads dug deep in the second half and just absolutely turned the game around for a 4-1 win.”

The 17-year-old was pleased with how he played individually, but was also full of praise for his defensive partners, which included Finlay Wallbank who stepped in to replace the injured Mfuni on 38 minutes.

Nevin said: “I’m happy with my own performance, and I thought when Fin came in for Teddy he was absolutely brilliant and played his part.

“The same with Kian Best. He was absolutely brilliant and that helps me as well, playing my game having two boys helping me out beside me.”

The Republic of Ireland youth international drew similarities between this game and the northern semi-final against Burton the previous Tuesday in which North End also came from behind to win.

“It was like the last game, we just couldn’t get things going in the first half,” he said.

“We conceded a sloppy goal, it probably shouldn’t have happened.

“But the boys kept their heads, didn’t lose focus, just kept going, stayed patient and we got our goals in the second half. I’m absolutely delighted and cannot wait for the final.”