The Dutch defender played 90 minutes as North End were held to a goalless draw in South Wales, with neither side able to break the deadlock in a game of few chances.

Alan Browne and Cameron Archer were among those to come close for PNE, while the home side's best opportunities came in the final ten minutes of the game through Uche Ikpeazu as he was denied twice by Daniel Iversen.

Sepp told iFollow PNE: “They sat deep with a flat back five which is always hard to play through.

“I think we did well, but they have some big players at the back and if they just sink in to the box it’s always hard to find the spare player.

“I think if you score one goal here you win the game, and we had the opportunities to get that goal.

“Everyone was very disappointed in the changing room; we should really get the three points.” 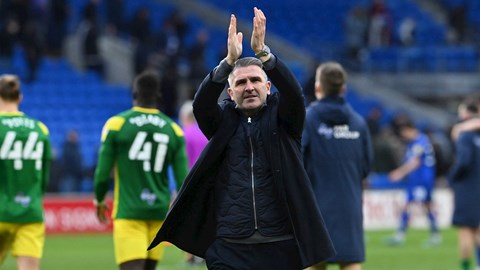 Like manager Ryan Lowe, Sepp felt PNE were just lacking that finishing piece in the final third, as the side in green for large parts found themselves camped inside the Cardiff half, but struggled to penetrate the backline.

At the other end – apart from the aforementioned Iversen saves – North End kept it tight at the back, to keep a fifth clean sheet in the last six away games.

Sepp added: “First half I don’t think they created much in my opinion, barely nothing.

“In the second half when they made some changes it got a bit harder with them playing even more long balls, and it turned into more of a fight game and we almost did the same thing when they started doing that.

“We started kicking long balls and that’s when you start playing into their hands, but it’s another clean sheet and I think we did well.”

PNE came into the game on the back of an impressive victory over AFC Bournemouth, and arrived in South Wales five games unbeaten on the road.

The goalless draw extended that run to six without defeat away from Deepdale, but 20-year-old Sepp was still left frustrated to not take all three points given the mentality of the group.

“Ever since the new manager came in we’ve had a good flow,” he added. “[We’ve been] playing well, so we just want to win every game.

“If you have that confidence we have at the moment you just want to keep winning, and that’s why we’re so disappointed we didn’t win today.”