Preston North End are pleased to confirm Bambo Diaby has signed a two-year deal with the club.

The Senegalese defender spent the second half of the 2021/22 campaign at Deepdale, after signing a short-term contract with PNE in January.

Diaby went on to play seven times in the Championship, earning his full debut in the home victory over AFC Bournemouth in February, and he will now stay with the Lilywhites until at least the summer of 2024.

Bambo said: “Of course I wanted to stay here. I said this when the manager was talking to me, he wanted me here and all the fans have supported me since the first day so it was easy to make the decision to stay here because we want to do something big. 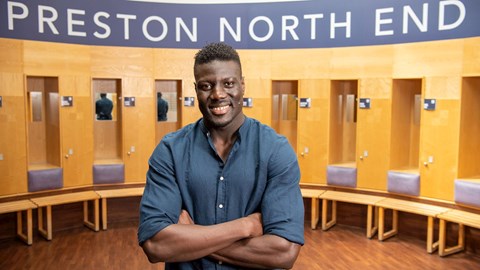 “He needs to show me a lot of things and for this I want to stay here because I know I can become a better player with him.

The 24-year-old, who moved to Spain as a young child, made his professional debut for Catalonian side Cornella in 2016, before going on to play in Italy and Belgium.

His first experience of English football followed in 2019, making 22 appearances for Barnsley, and the central defender returned to Oakwell with PNE in the penultimate game of the 2021/22 campaign.

Manager Ryan Lowe added: “Bambo’s been a credit to himself and to us ever since he came through the door, so we were keen for him to stay with us.

“His attitude’s been absolutely spot on, and we feel there’s a bit of work that can be done with Bambo as well, he’s one that we can teach and get better.