Bambo Diaby admitted it was an easy decision to extend his stay at Preston North End by a further two years.

Bambo Diaby admitted it was an easy decision to extend his stay at Preston North End by a further two years.

The 24-year-old spent the second half of the 2021/22 campaign with the Lilywhites, signing a short-term deal until the end of the season and going on to make seven appearances.

He has now extended that stay at Deepdale which will see him play in a North End shirt until at least the summer of 2024.

Speaking to iFollow PNE after signing, Bambo said: “My feeling is the same as my first time here. The first one was a short deal and now we’ve sorted a long one and we want to have a big season.

“Of course I wanted to stay here. I said this when the manager was talking to me, he wanted me here and all the fans have supported me since the first day so it was easy to make the decision to stay here because we want to do something big.” 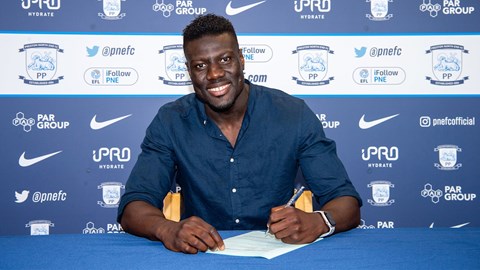 The Senegalese defender feels he still has a lot to learn working with Ryan Lowe, and thinks he can become a “better player” under the manager.

Bambo also has confidence in his teammates – and those who may come through the door in the summer – that they can achieve something together during the upcoming season.

“All the players, [including] the new ones, I think everyone who comes here comes with the same objectives.

“The only thing I can say for myself is I keep working the same way as the first day, I can just talk about me.

“I want to work hard, I want to do my best in every game and in training.”

That hard work has continued since the end of the 2021/22 campaign, with the former Barnsley man having documented his time working in the gym back home in Spain throughout the break on his Instagram account.

“That’s my holidays, I enjoy it,” he added. “I said this my first day, hard work is in my DNA so I keep that.

“I keep working, I want to work all the summer, but I enjoy time with my family and with my friends.

“But the only thing I have in my head is to be back stronger, to be back ready to have a good season.”

You can watch Bambo's full interview on iFollow above.