Daniel Iversen said he is proud of his time at Preston North End over the last 18 months, although he remains unsure of what lies in store for him next season.

Daniel Iversen said he is proud of his time at Preston North End over the last 18 months, although he remains unsure of what lies in store for him next season.

After joining on loan initially last January from Leicester City, and then once again last summer for the duration of the 2021/22 campaign, Iversen has become a key figure between the sticks for the Lilywhites. 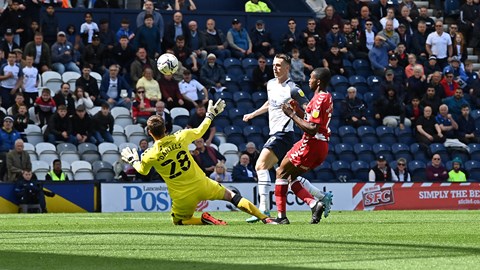 The No.12, who also won the Preston Supporters’ Collective’s Player of the Year award, said: “I’m really pleased with the fans awards and player awards. I wasn’t really expecting that and I’m really happy with that and being in the club.

“I’m happy with the performance [this season] but I think we could do a little bit better as a team, but that’s football sometimes. Sometimes you go up and down but I think it’s good to finish off here at home so I think it’s really good.

“It feels good to get the award from my team-mates. I’m pleased with what I have done and also the supporters, so I’m just happy about that.

“It was good to hear they [the fans] appreciate what I have done. It’s a big thank you from me to the fans, all the fans, and the club.”

Reflecting on his 18 months with Preston North End, the Dane has been pleased with his time at Deepdale.

“I think it was sorted after the last game last season, it was sorted, everything. Leicester just had to give the green light to let me go. It was quite an easy decision for me to come back.

“I’m really pleased to stay here and play so many games for Preston North End. I’m really proud of that.

“It’s 18 months of my life. There are some good people around the club. I’ve worked with Polly [Mike Pollitt, goalkeeping coach] for so many years now, I know how he’s going to work and he knows how he has to handle me.”

Dan said that the environment around the club is important to him when choosing a club, with the positive atmosphere at Deepdale aiding his time at the club over the last year and a half, but he doesn’t know what the future has in store for him next term.

“I have a contract with Leicester. I don’t know what’s going to happen next season, no idea, so just wait for next season to see what Leicester say and see which clubs are interested.”