Ryan Lowe felt his side had enough chances to put the game against Millwall to bed while the teams were level at 2-2.

Ryan Lowe felt his side had enough chances to put the game against Millwall to bed while the teams were level at 2-2.

As it turned out, though, his Preston North End outfit went on to lose the game 4-2, with the third of Zian Flemming’s goals and Charlie Cresswell’s header earning three points for the visitors in the second half.

The Lions raced into a two-goal lead early in the game prior to North End leveling before half-time, and it was PNE who had the best of the chances in the opening stages of the second period, before the visitors got themselves back in front.

Ryan told iFollow PNE: “We’ve had chances to put it to bed, haven’t we?

“Ched [Evans] fires one just across the goal, maybe a body could get in there, and Ali [McCann] has a shot which the ‘keeper saves with his foot.

“We’ve had plenty of opportunities to put the game to bed, and when you don’t capitalise on them chances like they did [you get punished].

“They had five attempts on goals and scored four goals so it says it all.

“We had 17 attempts, nine on target, but we’ve got to make sure we put the ball in the back of the net, which we have been doing of late.

“We scored two today but just couldn’t find that cutting edge this afternoon to get more goals.”

The manager was understandably disappointed with his side’s start to the game which saw them go two down inside 11 minutes.

He was also frustrated by the nature of the goals, too, which ultimately condemned North End to their first defeat in four games.

Ryan said: “The lads have just watched the goals back in the dressing room because I felt it was needed. 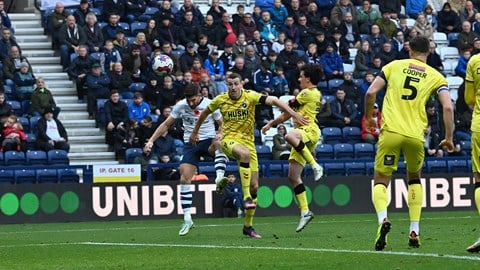 “They understand the goals we’ve given away are not good goals.

“It’s a frustrating afternoon really to go two goals down so quickly against a team we felt – with all due respect – we knew what they were going to do in terms of going long.

“The goals they’ve scored are a free-kick, when we’ve said don’t give any fouls away because Flemming’s got a good shot on him, and then to get spun for the first one was tough to take.

“But then we were in the ascendency. We kept playing football, doing the right things which we always do and we find ourselves back in the game.

“I said to the group at half-time if you don’t complicate things and do the basics right then we’ll be alright, but we didn’t in the second half.

“I thought we started the second half good but then in terms of their third goal it’s definitely avoidable, and then we switch off for a short corner and the lad gets a free header round the back, so overall we’re frustrated and disappointed with today’s performance and result.”

With Championship action now pausing for four weeks due to the Qatar World Cup, the squad will be given a week away from the training pitch before their return to Euxton.

From that point, it’ll then be about building towards league action getting back underway with a Lancashire derby against Blackburn Rovers at Ewood Park.

Ryan added: “They will have the break, and the days off when we get back after they have their own break will be limited because we need to make sure we drum it into them and get the work done.

“We need to get back to one or two basics which we’ve come away from. Maybe there was a little bit of tiredness towards the end there, and [there were] lads getting a bit tired and fatigued.

“If we can go a little bit better next time with 25 games in the next block and get more points then we’ll be on target to get where we want to try and get to.”

Watch the manager's full interview on iFollow PNE above.