Ryan Lowe expects to have a fully-fit squad to choose from on Wednesday night when West Brom come to Deepdale.

Ryan Lowe expects to have a fully-fit squad to choose from on Wednesday night when West Brom come to Deepdale.

In the weekend’s draw against Sunderland, the manager was without defender Andrew Hughes due to an illness, while forward Mikey O’Neill was still recovering from injury.

Both have now returned to training, though, and should be available for contention to face the Baggies.

On Hughes, Ryan said: “He’s been training with us yesterday, and he’ll continue to train today.

“He’s had a little bit of an illness and he wasn’t with us at the weekend, but he’ll be fit and available for selection.

“Young Mikey started training with us yesterday so at this moment – touch wood – there’s no one in the treatment room which is pleasing, but ultimately it gives us more selection headaches which is what you want.

“You want a fully-fit squad to pick from, and that’s what we’ve got.”

Standing in North End’s way on the evening is a West Brom side who arrive in Lancashire after a start to the season which they’ve been disappointed with.

The Baggies have picked up ten points from their opening 11 games and sit 21st in the Championship table.

There’s no doubting the quality and experience in their squad though, with Jed Wallace and John Swift – who played a direct part in a combined 42 Championship goals last season – just two examples of that.

Ryan added: “We can’t undermine a West Brom team with quality players and a quality manager.

“They haven’t started as well as everyone would have liked at their end. [They have] ten points, they’ve conceded 17 goals and scored 17 goals, and they probably want more points of course, like most teams would. 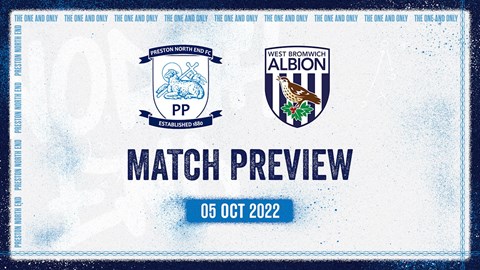 “But we can’t take them for granted because they’ve got some quality players as I said, and any West Brom team can beat any team in the division on the day.

“We’ve just got to make sure that doesn’t happen and make sure we worry about what we do. We’ll pay West Brom the respect they deserve, but it’s about what Preston North End do tomorrow night under the floodlights, live on Sky, and we’ve got to take the game to them because it’s a game we’ve got to try and win.

“Ultimately we can’t leave any stone unturned in preparation for West Brom because they’ve got some quality players.”

PNE will be looking for their first victory on home turf so far this season, and the manager admitted it’s “massively important” that his side start on the front foot, while looking to add to their impressive defensive record.

“We’ve been solid and resolute,” added Ryan. “Our defensive record has been fantastic; we want to continue that.

“We want to obviously, at the top end of the pitch, start putting the onus on not just the strikers but the midfielders and wing backs and eights, whoever that may be, to get some goals, and set plays are going to be key for us.

“But ultimately goals win you games of football, of course. They have conceded goals, but I’m sure Steve [Bruce] will be working on some stuff to stop them conceding goals.

“We’ve just got to try and find that way, and that's what we’ll be trying to do.”