Ryan Lowe thought his Preston North End side showed great belief to come away from Carrow Road with a 3-2 victory.

Ryan Lowe thought his Preston North End side showed great belief to come away from Carrow Road with a 3-2 victory.

PNE fell behind against Norwich City in the opening stages of the match, but a brace from Emil Riis turned the game on its head.

It looked as though Gabriel Sara had then earned the home side a point 15 minutes from time, but Troy Parrott’s heavily-deflected effort crept past Tim Krul to earn Ryan Lowe’s side all three points on the road.

Ryan said: “To come to somewhere like Carrow Road and Norwich, and to get three points and score three goals is massively pleasing.

“I thought the lads were fantastic; the belief in the group to come here and not just expect to take a point, to expect to win is what we wanted.

“It’s our first back-to-back wins [in the league]; it’s what we need.

“With the teams we’ve played: Sunderland, West Brom, away at Norwich, it’s a tough ride isn’t it? 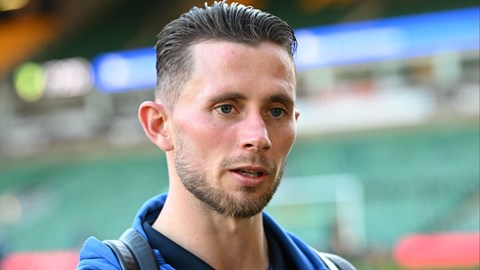 “But we can’t get too carried away. We’ve got to focus now on Bristol City [on Wednesday] because we’ve got to go there and try and replicate the same thing, and try and get a good result, and that’s certainly what we’ll do.”

North End headed to Carrow Road having not conceded a goal on the road in Championship action, but they fell behind inside just two minutes, as Josh Sargent opened the scoring.

The American then came close again in a spell of pressure which PNE had to weather, and once they got to grips with their hosts, that’s when the game changed.

Ryan told iFollow PNE: “I thought we felt a little bit sorry for ourselves in the first five or ten minutes because we had a bit of a sickness bug going through the camp and a lot of the lads there were getting sick, and Pottsy [Brad Potts] has had to come off the bench.

“Maybe we felt Norwich, league leaders if you like, flying high, unbeaten in nine, and then once we got to grips with them and put our foot down and started playing some football, I thought we were very good and worthy of being the best team.

“As you well know they’ve got quality players and we’ve got to expect to be under the cosh a little bit as we were. To score three goals was massively pleasing.”

Riis’ brace helped the Dane double his tally for the season so far, adding to his goals against Coventry City and West Brom.

His first was a superb header on the end of a nice cross from Robbie Brady, while Álvaro Fernández picked him out on a quick counter in the second half, and he kept his cool to slot home.

The manager said: “What’s more pleasing for Emil is the position he’s taking up.

“We’ve spoken loads of times about where he should be. We’ve got quality players who can find him as we’ve seen with Robbie.

“He’s just standing there with a header, and then the other one he’s been picked out in between the goal in the 18-yard box, and he gets a touch away to get a goal.

“Troy’s one is a bit of a ricochet or whatnot, but it doesn’t really matter how they go in, if they go in.