Ryan Lowe said he would continue to experiment with his Preston North End side to find a solution in attack after the Lilywhites put another point on the board with a goalless draw away to Sunderland.

Ryan Lowe said he would continue to experiment with his Preston North End side to find a solution in attack after the Lilywhites put another point on the board with a goalless draw away to Sunderland.

Ben Whiteman, Ched Evans and Jordan Storey were perhaps closest to finding an opener for the visitors – two of that trio having efforts cleared off the goal-line – but North End ultimately could not force their way through at the Stadium of Light.

Lowe made four changes to the starting XI from the last outing against Sheffield United a fortnight ago, setting out in a 3-4-2-1 shape, as he explained how we will continue to look for the best set-up to find a solution in front of goal. 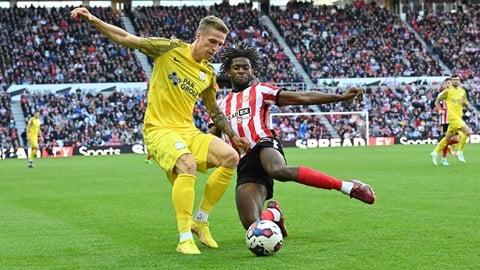 “I said to the boys that I’ll keep experimenting until we find a solution and that’s only because we’ve got good players, we felt Robbie [Brady] coming inside on his left foot to get some shots away and Emil [Riis] coming in on his right foot inside as a bit of a striker stroke ten.

“I thought defensively they were good, they can do a little bit more, but I think sometimes, a lack of confidence is obviously a bit of a killer. Emil gets in there, he’s got some chance, but I said to him in there not to be too down about it, and the next one that comes you have to hit it first time and see where it takes you.

“We adapted a little bit differently, a different approach in trying to get an attacking player, who I know in Robbie and Emil definitely will shoot if they receive the ball in them areas. Overall, yeah, we’re pleased.”

While Whiteman and Storey of the aforementioned three had shots cleared off the line in either half, Evans was kept out by a superb reaction save from goalkeeper Anthony Patterson, after the ball fell at his feet from a corner.

The manager felt that might have been a goal but for the small margins currently going against his side, but he believes those are bound to eventually turn in PNE’s favour.

“At some point, that will ricochet off someone and go in off someone’s backside, however way it will, I believe in that. I thought Ched [Evans] was fantastic, what he done today, he was up there to get hold of the ball for us, to get Robbie and Emil to be linking in.

“As I’ve said loads of times, I think we’ve got a squad that can adapt to whatever formation we play and whatever we set them up to do. Pleased with the point, I would’ve loved a perfect away performance with three [points], but overall, pleased.”

Ryan was impressed by the away following on Wearside, too, with over 2,500 North End supporters making the near 250-mile round trip to the Stadium of Light.

“The performance from the fans was outstanding, so a big thank you. I had to take a breath at times when I was looking over and seeing they’re out-singing this lot here.

“They got a little bit louder and ours were getting a bit louder and you could gradually hear them, they stopped and we carried on. A big thank you from me, the staff and the players, because it means a lot. They know we’re trying to do the right things.”

Concluding, the gaffer agreed with the notion that this point could prove an especially good one if his side can go on to take all three next time out, back at Deepdale against West Bromwich Albion on Wednesday night.

He added: “There’s not many teams that will come here and take three points, especially with the crowd. The way they play, they interchange the ball with players, fantastic, and you can see, they’re throwing the kitchen sink at it.

“One thing we did do is we withstood every bit of pressure they put on us. It’s going to be another tough encounter on Wednesday night, we know that, but we’ve got to get our own, we’ve got to start getting on the front foot like we did today, and if we continue the performance we did today, at home, I’ll be happy.”