Goals from Ben Whiteman and Ched Evans weren’t enough for Preston North End to earn a point in the West Lancashire derby at Bloomfield Road.

The Seasiders broke the deadlock on the half-hour mark through Jerry Yates and, after Emil Riis was brought down in the area by Marvin Ekpiteta, Ben Whiteman equalised from the penalty spot.

PNE were the side on top in the opening stages of the second half, but Arsenal loanee Charlie Patino put the hosts back in front on 68 minutes, and Yates soon got his second of the afternoon.

Evans did pull a late goal back for North End, but as PNE pushed for an equaliser, CJ Hamilton broke free and scored with the final touch of the game.

Ryan Lowe made just one change for the derby from Tuesday’s victory over Huddersfield Town, with Liam Lindsay returning from injury to replace Andrew Hughes, who missed out with a knock.

North End started the game brightly and created early chances as soon as the first minute, when Álvaro Fernández sent a dangerous looking cross into the box, which needed to be headed clear.

After Riis had an effort blocked and Lindsay sent a volley over the crossbar, former PNE goalkeeper Chris Maxwell was called into action when Brad Potts sent a low fizzing effort towards the front post.

Ben Woodburn was next to try his luck on 25 minutes, picking the ball up from Fernández who broke free on the left before seeing a 25-yard effort saved.

It was the hosts who took the lead, though, as Gary Madine rose highest from a free-kick after half an hour, heading back across goal for Yates who nodded home.

There was almost an instant response from the Lilywhites, with Maxwell just about dealing with a Whiteman effort, which bounced just in front of him.

Maxwell saved again a few minutes later to deny Riis from close range, after the ball had fallen to him following Woodburn’s strike being deflected and into the air.

Riis was causing havoc and on 37 minutes did very well to turn Marvin Ekpiteta before driving into the box and drawing a foul from the centre half, earning PNE a penalty. Skipper Whiteman stepped up and stayed calm to draw his side level.

On the other side of half-time, Whiteman had a free-kick heavily deflected and it so nearly fell into the path of the lurking Jordan Storey, but Ekpiteta just got there first.

The hosts then took the lead against the run of play on 68 minutes, as Patino found the bottom corner from around 20 yards.

Again, North End almost had a quick reply, but Maxwell was equal to Whiteman’s effort at his right-hand post.

On 81 minutes, Yates scored his second of the afternoon as he headed past Woodman at the far post.

Substitute Evans pulled one back a minute from the end of normal time with a header of his own - courtesy of the post - and as Lowe’s men were pushing for an equaliser and Freddie Woodman went forward for a corner, the hosts broke forward and Hamilton finished into an empty net from distance. 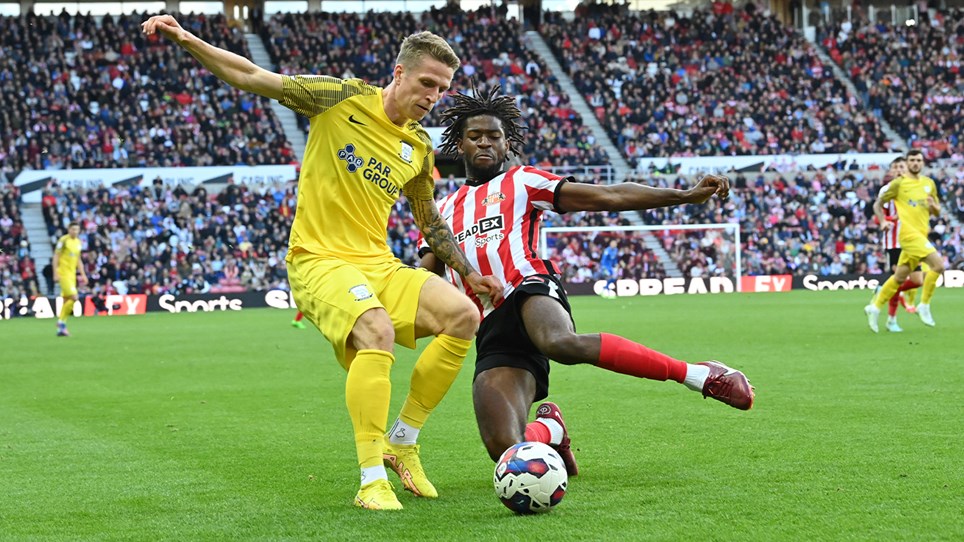