Ryan Lowe is looking for his side to express themselves when they head to Sunderland this weekend.

Ryan Lowe is looking for his side to express themselves when they head to Sunderland this weekend.

Championship action has paused over the last week and a half for the season’s first international break, but PNE will kick off a jam-packed October on Saturday at the Stadium of Light.

In their way is a Sunderland side fresh from promotion from League One, and they’ve enjoyed a positive start to the season, despite having the unexpected task of changing managers in the early weeks of the campaign.

Ryan told iFollow PNE: “They changed manager, which probably wasn’t ideal for them, but then they’ve brought a solid manager and good bloke in Tony Mowbray in who’s just adapted so well.

“They’ve won a few games and drawn a couple. They’ll be happy with their start coming up from League One, but we’ve got to worry about what we do and make sure we’re on it from minute one, and put in a performance that hopefully gets us a result.

“But saying that, it’s a place where everyone wants to go. Sunderland fans are immense, aren’t they? 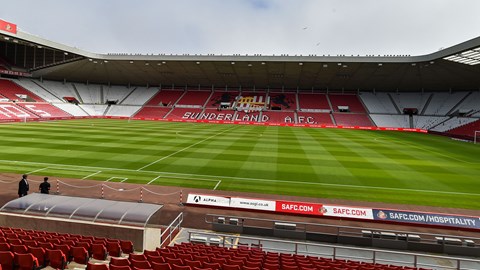 “They get behind the team but they can also go against their team if they’re not doing as well, which is football at times, but we’re going to go there, enjoy ourselves and express ourselves.”

PNE will be backed by around 2,500 fans of their own on Wearside, and the manager is looking for them to be “loud and proud” on the day.

In terms of his team selection, he’s got a fully fit squad at his dispense, with Ben Woodburn now back in full training.

The only question mark remains over whether the players who have been out on international duty will be called upon, having only returned to Euxton on Thursday morning.

Work has continued over the break, though, for the players not away with their country.

“We’ve got a lot of work into the lads who were behind,” added Ryan.

“We’ve had a lot of youngsters up with us as well to show them what we need when they do come up.

“We’ve worked on some good stuff. Obviously the lads have had a little bit of downtime as well which is important.

“Then obviously the lads who have been away on international duty, we’ve monitored their numbers and the minutes they’ve played, so it’s been a good 12 days or so without everyone in the building.”

Ryan was actually in Dublin to see three of his players represent Republic of Ireland in their 3-2 victory over Armenia earlier in the week.

Troy Parrott and Robbie Brady started the game, and the latter ended up being the match-winner after netting a last-minute penalty in the Nations League.

“I was pleased for Rob, outstanding," Ryan said. “16 months out of international recognition, then we get a phone call off Stephen Kenny a couple of weeks ago to say he was going to put him in and he's been really pleased with his performances of late.

“Then to get an assist and to get the penalty last minute [was great].

“I’ve just been showing him a video actually. I was videoing it; I was like a big kid jumping up and down when he scored.

“I was really pleased for Rob and his family, it’s a special moment for him.”