Ben Whiteman described his overriding feeling of disappointment as Preston North End lost for the first time in the Championship this term at home to Birmingham City.

Ben Whiteman described his overriding feeling of disappointment as Preston North End lost for the first time in the Championship this term at home to Birmingham City.

Maxime Colin’s first-half header was the first goal conceded by the Lilywhites in Championship action this season, and that ultimately proved enough to see the visitors leave with the three points. 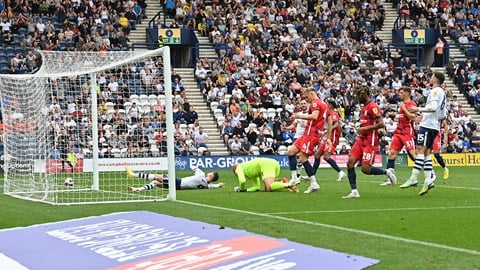 There were chances for the Lilywhites in attack, but to the frustration of Whiteman and his team-mates, they could not find an equaliser.

The midfielder told iFollow PNE: “It’s a disappointing feeling. Looking at the game, there was a lack of quality really all over the pitch and that’s probably the most disappointing thing. Again, we get into some great areas but it just seems to not go our way at the minute.

“I can’t really remember them having too much bar the goal. I think the overriding feeling is just really disappointed.

“You’ve got to take your chances in football, I think that’s everyone as well, it’s not just the attackers, it’s the whole.

“We need to start taking our chances, we can’t keep keeping clean sheets every single game, it’s not going to happen. We need to start putting the ball in the back of the net.”

The No.4 felt there was a lack of quality in attack for PNE.

“I just think we need to take our chances. I think we get in some great areas and we don’t put the ball in the back of the net so you’re not really going to win many football matches if you don’t score; you’re not going to win any.

“I think just probably on the whole of the game really, I think it’s just probably a lack of quality that’s let us down today. It’s a massive disappointing feeling really.

There is now a first free midweek period coming up for Ryan Lowe’s side in over a month as they look ahead to a trip to Bristol City next weekend.

“We’ve had a hectic period over the past month or so,” Whiteman added.