Preston North End U19s defender Jacob Slater grabbed two assists in a 4-0 win over Walsall, the day after it was announced he had signed a professional deal to keep him at Deepdale until the summer of 2025.

He picked out Finlay Cross-Adair with an accurate cross for the forward to convert after just four minutes.

Then on the half-hour mark, he showed outstanding anticipation to beat the intended target of a Walsall goal-kick to a header and found Kitt Nelson, and the forward was able to fire home from long range.

“I was really happy with my performance,” said the 17-year-old, in a post-match interview with PNE.Com.

“I’ve been trying to chip in with more goals and assists so I’m pleased to get two good assists.” 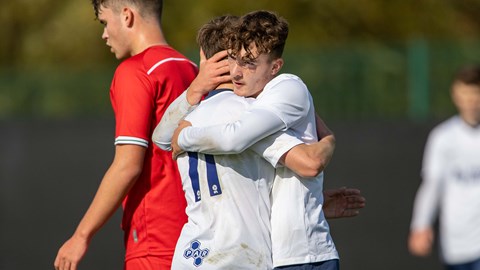 It was a dominant performance from Slater and his teammates, who stormed into a 4-0 lead after just half an hour, with the Republic of Ireland youth international heavily involved going forward.

“It was a great performance,” he said.

“I think we probably won the game in the first half with the hard work we put in and being really clinical, and in the second half it was just a case of keeping the ball and keeping it moving.”

Slater has been in and around the first team on several occasions so far this season and has twice come off the bench in Carabao Cup matches.

His progress was rewarded with a professional contract, which was announced the day before the match against the Saddlers.

He said: “I’m really happy, that was what I wanted to do at the start of the season so to have it done so early is really good.

“Now I can kick on and focus on impressing with the U19s.”