Members of the PNE Forces programme are holding a fundraiser on the evening of Saturday 9th November in aid of the Big PNE Sleep Out taking place next week. 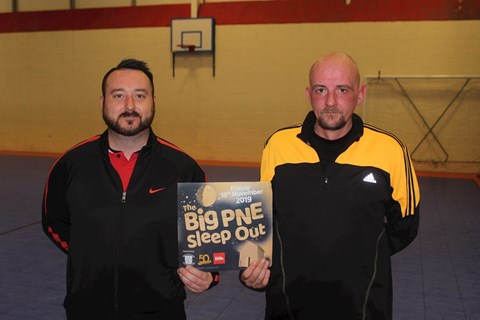 Veterans Look To Give Back With Sleep Out Participation

Chris Haddow, Peter Judson and Steven Ford will all be bedding down at Deepdale on Friday 15th November for the Sleep Out, and all three are regulars of the two PNE Forces sessions held every Wednesday; with one social session hosted by the Wings Centre on a Wednesday morning and a free football hour taking place at PlayFootball Preston on a Wednesday night.

The Sleep Out itself is a joint fundraising bid by Preston North End, Preston North End Community and Education Trust, Blog Preston, Biffa and the Foxton Centre, aiming to raise £50,000 for the latter organisation, which works with vulnerable adults, including homeless people, in Preston.

Money raised from the Sleep Out will be used for the Foxton to buy and renovate a house for the use of rough sleepers in the city.

There has been a wider effort from all of the Forces team members to get behind the Sleep Out effort with a charity fundraiser being held at Ribble Lodge on Saturday night and a number of fantastic prizes on offer, some of which have been kindly donated by a whole host of businessess in Preston.

Doors open at 7pm for the event, allowing time for those attending North End's home fixture against Huddersfield Town earlier on the same day to get down to support the cause, with tickets available on entry for just £2 each.

There will be a slient auction to kickstart the night before a brief about the Sleep Out appeal, to be followed by live music acts and chances to win prizes with a raffle draw and a prize draw.

Prize draw tickets can be purchased for £5 each, while raffle tickets are available at £2 per strip or three strips for £5. Football cards will also be available on the night at a cost of £1 per team.

If you're unable to attend the fundraiser but would like to donate to the Sleep Out appeal, you can do so by clicking here.