Two of Preston North End’s Matchday Supporter Liaison Officers will be bedding down for the night on Friday as the Big PNE Sleep Out comes to Deepdale.

Leanne Naylor and Janet McDonald provide assistance to supporters attending home matches and are also regular travellers to the Lilywhites’ away matches, where they have held several charity collections on the supporters coaches over the years.

They are now aiming to help the Sleep Out appeal, an event being held by Preston North End Community and Education Trust, Biffa, Blog Preston and the Foxton Centre to tackle homelessness in Preston. 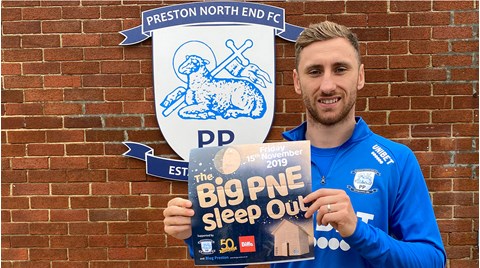 A £50,000 fundraising target has been set, with all monies raised to be used by the Foxton Centre to buy and renovate a house in Preston for rough sleepers in the city.

That target is now halfway to being met with more than £25,000 raised so far with Janet and Leanne doing their bit to assist the fundraising.

Leanne said: “We’ve worked on the coaches for North End over the years and collected quite a lot of money, probably over £1,000 a season for different charities.

“We saw the Big PNE Sleep Out advertised by Louis Moult and we sat down and chatted together and said, ‘Shall we give it a go?’ That was it, we just thought, ‘Let’s give it a go.’ It’s a good charity to support.”

Janet added: “We got the ball rolling by getting the money and advertising it and we were more than happy than to do that.

“We’re very fortunate in the job that we do and we wanted to support another charity, we thought this was an excellent one to support as two good friends.”

The Sleep Out is now just a couple of days away and both Leanne and Janet admitted that it is a nervy prospect as temperatures cool in Preston.

But both ladies remain committed to the cause and conscious that it’s just one night for them and the many others bedding down overnight on the concourse on the Bill Shankly Kop, whereas it is an everyday concern for rough sleepers in Preston.

Leanne added: “I’m quite nervous, but we’re fortunate; we can go home and turn the heating and lights on. These people have to sleep like this every night. It’s not a party, far from it, it’s a serious night.

Donations to the Sleep Out appeal will remain open after the event and you can now contribute to the appeal via text donation.

You can make a one-off donation to the appeal by texting ‘PNESLEEPOUT’, followed by any number between one and 20 depending on how much you wish to donate, to 70085.

Alternatively, make a donation online by visiting the appeal page here, and you can also visit Leanne and Janet’s fundraising page here.