The tournament was organised and co-ordinated by the Trust’s Inclusion Manager, Melissa Brown, with the format running for its second year in a row. 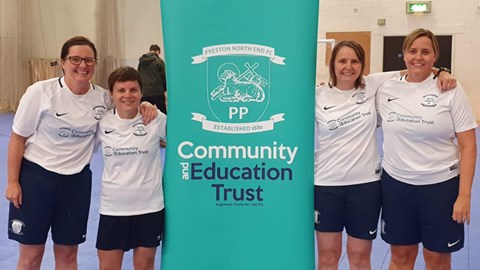 Walking Footballers Called Up For England

Melissa introduced the tournament for the first time in 2018 after sadly losing her uncle, Gerald Brown, to kidney cancer, despite him only being in his mid-50s and having led a healthy and active lifestyle.

Running the tournament for two years in a row has now seen more than £1200 raised for Kidney Cancer UK as Melissa explained how the idea first came to fruition.

“My uncle played walking football for Fleetwood Flyers and even during his treatment, he continued to complete his duties as a treasurer for the club, so I decided to create the now annual event of the GB Trophy,” said Mel.

“It is important to note that it is not a memorial trophy, but more of a celebration. It’s a nice event to get a lot of people together, play a bit of football, raise a bit of money and have a laugh, as that’s what he’d want.

“Both years now have been such wonderful occasions with extreme generosity from everyone there. Over the two years we have now raised over £1200 for Kidney Cancer UK which is amazing.

“My uncle must be watching over, as Fleetwood have now won two years on the trot!”

There were a total of eight teams competing in the tournament from across the four different clubs, with one of the sides representing Fleetwood emerging as winners.

The Trust runs three weekly walking football sessions, all at the club's community training centre at PlayFootball, Ingol. All overs-50s are welcome from 6.30pm until 7.30pm on a Tuesday night at a cost of £3, while it's women only - of any age - on a Thursday night at the same time, with a price of £2.

Finally, from 11am until 1pm on a Friday, there is an hour of football followed by another social hour where refreshments are available for participants to enjoy.