There will be a number of themed activities taking place at Deepdale, both around the ground and on the pitch, in the lead-up to Preston North End signing the Armed Forces Covenant ahead of Saturday’s Lancashire derby.

There will be fan engagement stalls near the Splash statue and at the corner of the Alan Kelly Town End and the Sir Tom Finney Stand ahead of the game, each being run by the team from the Duke of Lancaster Regiment. Military vehicles will be on display around the ground. 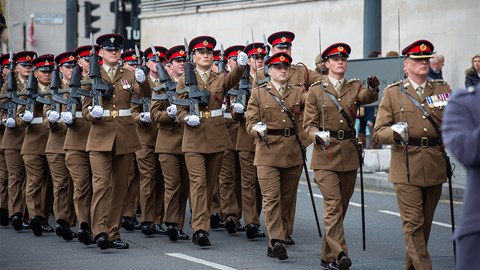 North End players will be wearing warm-up shirts bearing the name of the Army Benevolent Fund, the official soldiers’ charity.

Lietunant Colonel Justin Tancrel, the Commanding Officer of the Fourth Battalion of the Duke of Lancaster’s Regiment, will be signing the Covenant with a senior club official from Preston North End 20 minutes prior to kick-off.

When the teams come out for kick-off, members of the football team from the PNE Forces programme and currently serving members of the Armed Forces will form a guard of honour, before the match ball is marched to the centre circle by Sergeant Danny Shilton of the Duke of Lancaster’s Regiment.

There are also discounted tickets on offer for those from a military background. Past and present members of the forces will be able to pay concession prices for this fixture upon showing a valid military ID card when purchasing their ticket from the Sir Tom Finney ticket office at Deepdale.