Staff from the Foxton Centre are being presented with new challenges as they continue their outreach work for rough sleepers, even amidst the ongoing COVID-19 crisis.

The Foxton Centre is a charity based at the heart of Preston, working with vulnerable young people dealing with issues such as addiction, mental health problems and homelessness.

💤 @pnecommunity are holding the #PNESleepIn next Friday to recognise the fantastic work of @TheFoxtonCentre and @louismoult is encouraging as many people as possible to get involved! 👇

Preston North End Community and Education Trust have previously united with the Foxton Centre for last year’s Big PNE Sleep Out, raising more than £80,000 for the charity’s Housing First initiative, and will now do so again for the Big PNE Sleep In on Friday 10 April – along with fellow local organisations, Biffa and Blog Preston.

For the Sleep In, we are collectively asking the Preston community to stand in solidarity with rough sleepers and show support for the Foxton on Good Friday evening, by bedding down for the night in a sleeping bag and sharing photos on social media using #PNESleepIn. 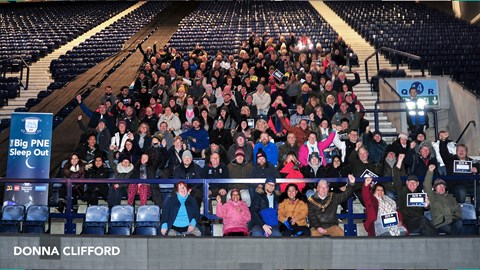 Chief executive of the Foxton Centre Jeff Marsh has been on the ground for the charity’s continued outreach work despite the difficult circumstances currently presented worldwide.

Among the tasks for the charity has been moving homeless people into suitable accommodation and providing them with food and support with their physical and mental health, continuing to help rough sleepers off the streets of Preston, and much more.

However, that has been made much more difficult, with social distancing rules requiring the charity’s homeless hub in the city centre to close. 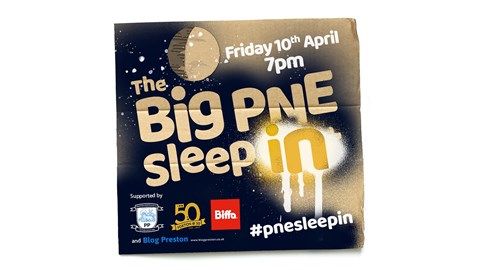 Join The Big PNE Sleep In On Good Friday

Speaking to PNE.Com, Jeff said: “At short notice, Preston City Council block booked a hotel and we moved all seven residents of the hub into that hotel as well as doing a massive amount of outreach to find other people to bring them in as well. We ended up with 28 people I think in the hotel over the space of a weekend.

“What we’ve done since is supporting those people in that hotel because they all had self-contained rooms with their own bathrooms, which is great from a disease prevention point of view, but it’s not very practical for living.

“It’s okay for a couple of days, but there’s no catering facilities. We’ve been providing food and providing support for those people, sorting out prescriptions for people who have addiction problems, organising health support, those sorts of things.

“Trying to keep people sane, too – I think we’re all struggling with the idea of self-isolating and being in a hotel room by yourself isn’t brilliant. Since then we secured some studio flats for people so we’ve got nine people now living in those studio flats, moved out of the hotel, so they’re self-contained with a proper kitchen, a really nice set-up.

“That’s on top of 34 we have in our Housing First scheme and 25 we have in properties supplied by Community Gateway, the local housing association. We’re continuing to support those people as well.”

The Foxton Centre have also been able to rely on fantastic support from the community to assist their efforts and a real sense of togetherness from their staff.

Jeff added: “It’s been hectic and staff have had to do things that are completely to the job they were recruited for, but the team has really mucked in and everybody’s got down to it.

“We’ve had fantastic support recently from the team at Preston Minster. They’ve been preparing food for us, bringing that in, initially daily and then every couple of days through their team of volunteers.

With restrictions in place across the country due to the COVID-19 pandemic, the Sleep In is a great opportunity for families to get involved with supporting the Foxton, especially with last year’s Sleep Out having been restricted to 18-year-olds and over.

And on the subject of the Sleep In, Jeff concluded: “I am taking part, a number of our staff will be taking part as well and we’ll have the photos of us curled up in our sleeping bags!”

After his heavy involvement in last year’s Sleep Out campaign and previous support for the Foxton Centre, Preston North End’s No.9 Louis Moult has once again backed the Sleep In effort this time around, too.

If you are concerned about the welfare of a homeless person, reports can be made to reporting service Street Link, which connects rough sleepers to services in their area; like the Foxton Centre. The service is available throughout England and Wales and alerts can be made on the Street Link website,  app or by calling 0300 500 0914.

For more information about the services of the Foxton Centre, email info@thefoxtoncentre.co.uk or visit their website by clicking here.