Jo Harwood has commended the community work of the club and the Community and Education Trust after receiving her PNECET Helping Hamper last week.

Attending the Trust’s walking football and Sporting Memories programmes, Jo is heavily engaged with all aspects of the club and is also a season ticket holder at Deepdale with her husband Pete.

The Trust have been delivering hampers to members of both the Sporting Memories and walking football programmes as well as other vulnerable members of the local community as requested.

Jo cares for husband Pete and the couple have been unable to leave their home – except for exercise – for six weeks due to government guidelines relating to the Coronavirus crisis.

“My husband has Parkinson’s and dementia,” Jo explained to the club website. “We’re both shielding, we’re self-isolating, and we haven’t been out for more than six weeks now, other than the garden and I have a short bike ride.

“We’ve been dependant on family and neighbours delivering food parcels because it’s been difficult to get an online shop, so that’s been a bit awkward but the neighbours have been brilliant. Then it’s just trying to keep occupied.

“We’ve managed to get one online order. I ordered something around ten days ago which is due this week! I’ve got a good neighbour who picks up milk for us and that’s good.” 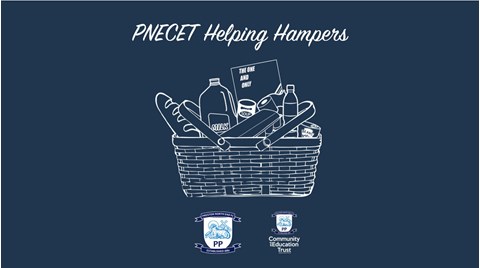 Jo and Pete have therefore been reliant on family, friends and neighbours to help with bringing them shopping, having encountered difficulties with making regular online shopping orders, but were last week recipients of a helping hamper.

Theirs was delivered by Preston Police, namely PNE football officer PC Paul Elliott, who has been among those joining Jo at the Trust’s Sporting Memories sessions previously as well.

“It was lovely [to receive the hamper] because there were things in there that we had run out of or couldn’t get hold of.

“We’ve had a look at the exercise sheets and Pete has read the magazine, he was flicking through that which was good.

“It was just nice to see a friendly face – although it did frighten me when they pulled up in a police van! It was really good to know that the club and the community are thinking about people.

“Paul has been to a couple of the Sporting Memories session as well so that was good.” 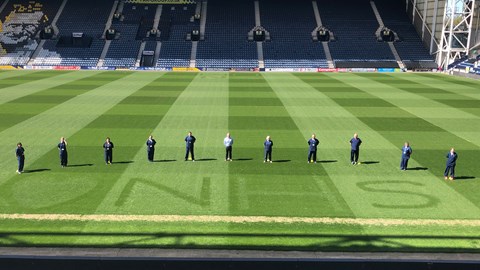 As North End fans themselves, Jo praised the community feel around the club at present, with the PNECET Helping Hampers initiative seeing the club and the Trust join together for the benefit of the community.

The club have been actively working to help the community at this time, with first team players past and present, as well as manager Alex Neil, making phone calls to older season ticket holders on what should have been Gentry Day earlier this month just one of several club-led initiatives.

“You feel like you are part of the club, it’s not a big thing that is away from you,” Jo added.

“Everyone is so friendly and wants to be involved and they don’t distance themselves from you. Even all the players, I know they have been ringing people up, and the community side of it – you don’t feel like you are forgotten, you feel like you are part of something.”

PNECET Helping Hampers have been funded thanks to the generous donations of the Preston North End first team squad, management and the general public, as well as a £5,000 grant from the Lancashire COVID-19 Community Support Fund.

You can nominate a vulnerable member of the community to receive a hamper by emailing community@pne.com.