Preston North End Community and Education Trust students observed a socially distanced awards ceremony at Deepdale last week to congratulate the high achievers in the classroom and on the football pitch over the past academic year.

It was a chance to bid farewell for those who have completed their studies with PNECET this summer as the success stories of both progressing and departing students were recognised as part of the award presentation.

As well as studying a Level 2 or Level 3 diploma in sport, students train and play alongside their studies and compete in the EFL Community and Education Alliance League against other club community organisations, representing Preston North End.

Education programme leader Jodi Collum said of the students’ achievements: “The awards ceremony is something that we like to do at the end of every year, it’s a chance to get everyone together and celebrate the successes and achievements and the year that the students have had.

“This year has been a bit challenging and different for everybody, but the opportunity is still there. We wanted to give our second years a really good send off. The chance to be able to get them here in the stadium and deliver the awards is great and to see them smiling and see them off happy is exactly why we do it.

“When it came to lockdown, it was really encouraging to see how much the students engaged with us throughout the process. Everyone engaged, they all carried on with their studies and everyone managed to submit all their work as well. It was really difficult choosing those high achievers because of that, as everyone plugged in and did really well.”

Players from all three men’s teams and one women’s team were recognised with Player of the Year and Manager of the Year accolades as well as awards for educational attainment.

There was also the most prestigious honour for the student of the year – the Sir Tom Finney Trophy – which was won by departing Level 3 year two student Ben Etchells. 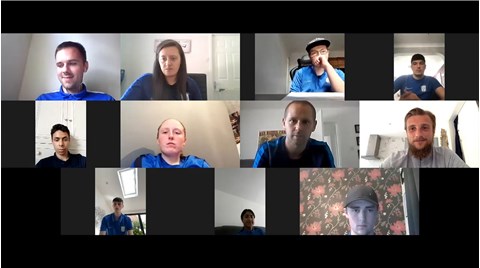 Ben achieved [grade] having completed the Level 3 diploma this summer and is now going onto study Sports Journalism at UCFB (University College of Football Business) in Manchester from September.

Ben said: “It’s a proud moment for me. Being a fan of Preston North End, winning the Sir Tom Finney Award is a big moment for me.

“I would recommend the course to anyone who would fancy going into football. When I arrived, I didn’t really know what I wanted to do in the future, but I’ve been given opportunities to do analysis, to do journalism and a range of other things that have set me up to go into an array of other careers and I’ve really enjoyed every minute.

“It’s set me up very well because I can now go in there knowing that other people have gone to colleges and haven’t had the same experiences that I have had. I’ve been in the press box several times, I’ve been up and down the country doing reports on the teams here and some of the youth games as well.

“It’s given me the experience to get ahead of any other students from different colleges that are going to university.”

PNECET has recently joined forces with Preston’s College to form the Preston Centre of Sporting Excellence from September to offer high quality technical education programmes, bringing together the experience and knowhow of staff, and the world class facilities, of both organisations.

As part of the partnership, prospective students can now study a Level 1, Level 2 or Level 3 diploma in sport and continue to represent Preston North End and Preston’s College in the EFL Community and Education Alliance league, and take advantage of a wealth of work placement opportunities.

Express your interest in joining the course this September by clicking here or email graeme@pne.com for more information.