Daniel Johnson joined Barton St Lawrence students’ Together As One lesson via Zoom before the Christmas break.

Year 5 students at the school have recently completed the Together As One programme, which is delivered by the Trust in partnership with Windrush Initiatives over six weeks, to educate young people about racism and how black people have been historically portrayed in society.

Students’ lessons have focused on the subjects of racial stereotypes, terminology, racism in sports, initiatives to tackle racism and privilege, followed by making their anti-racism pledges in the final week of their studies. 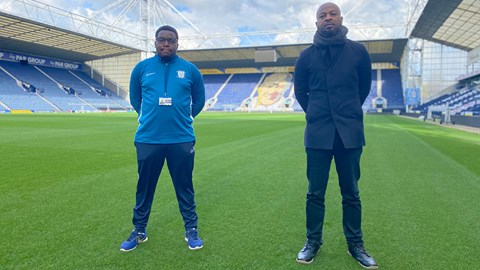 PNECET And Windrush Initiatives Launch Together As One Racism Education Programme

DJ joined the students on week five of the programme to discuss his own experiences in sport, and while revealing that he has not suffered racist abuse himself, he was able to open students’ eyes to the experiences that some of his friends have experienced both within football and otherwise.

When asked by students in the virtual lesson whether abuse can be a distraction while playing, North End’s No.11 told the class: “It can definitely take your focus away. What is the bigger picture, is it focusing on the game, or focusing on the scenario or the issue?

“Personally, no, I haven’t been racially abused on the field, but I do have friends that have been. It really hurts that someone that close to me feels that pain sometimes.”

He added: “If people don't want to change, then it's going to be very difficult to impose our change on our views and what we think. I think change has got to come within.”

Sagwati said: “I’ve shared my own experiences of racism and when I’ve brought that to students’ attention, they’ve been quite shocked.

“But they’re happy to engage in that conversation and how they can deal with things on social media, with their parents and their friends.”

Together As One is delivered by PNECET as part of the Premier League Primary Stars programme, supporting children with cross-curricular delivering in their PE lessons through the power and appeal of football, and upskilling teachers' delivery of PE.

Teacher James Davis added: “They’ve found it really engaging, interesting and informative, and having Sagwati come in and have the opportunity for the children to ask the questions they want to, to somebody that has the answers, has really helped them.

“I thought his answers were really sensible, really age appropriate, and they really helped nail the message we were trying to get across to those children. In response, the language and the questions the children have been asking have really taken on another level.

“I think the fact that Preston North End are offering these opportunities for schools and communities and educating them on issues such as diversity, and using the resources they have available to them, is a fantastic idea.

“It’s really helped up level the children’s learning in a way that I don’t think we’d have been able to do without what’s been offered by PNECET and the football club.”

Year 5 student Jack added: “It’s really good how a Preston North End staff member has come in, seeing as he knows so much about this topic, and he can teach us what we need to be aware of in our life and to never be racist, because it can hurt people’s feelings.

For more information about Together As One, please contact sagwati.malabi@pne.com.