Preston North End Community and Education Trust’s Festive Hampers campaign has concluded having again provided essential support in the form of deliveries of foods and engaging festive materials to vulnerable members of the community throughout December.

The campaign was set-up in late November, following the summer PNECET Helping Hampers initiative, which saw more than 1,000 essential food hampers delivered to those most in need following the first national lockdown in response to the onset of the Coronavirus crisis.

In just over three weeks of December, we have provided more than 6⃣0⃣0⃣ essential food hampers for the elderly and vulnerable in Preston and the surrounding areas. 🙌#MerryChristmas #ChristmasDay #pnefc pic.twitter.com/tDEZWsjh1L

Festive Hampers have again included essential food items, but in addition, festive items such as Christmas puddings and mince pies have featured inside the hampers, as well as engaging items such as reading materials and even a jigsaw.

Hampers have been distributed to those in need from across Preston, in a variety of ways.

Deliveries have been made to vulnerable individuals referred by the general public, while deliveries have also gone to those in need who are accessing the Trust’s Tackling Loneliness Together programme, with PNECET staff again out in force in the local community. 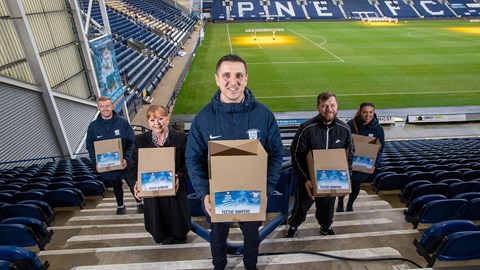 PNECET Partners With Here For Humanity For Christmas Day Deliveries

The initiative has been supported by a number of local businesses, with boxes provided by the Cardboard Box Company, while essential goods were donated by local supermarkets Morrisons Riversway, and JTF Warehouse, waste management firm Biffa Preston, baking firm Warburtons, and dairy firm Singleton’s & Co.

Meanwhile, the Striped Pig donated ready meals for use within the hampers, and local author Michael Barrett, who also penned ‘The Rise of the Invincibles’, donated copies of his new book ‘PNE Forever’.

Preston’s Centre of Sporting Excellence students and Preston’s College students enrolled on the National Citizen Service programme also helped to put together the boxes and pack the hampers as part of their social action projects.

Hampers have been distributed to identified vulnerable school children and their families, reaching primary schools and high schools from all areas of the city. The identification process of vulnerable individuals has been supported by a number of Preston City Councillors, who themselves have delivered a number of the Hampers.

Also delivering the hampers has been Preston North End football officer, Paul Elliott. The Trust has also worked together with Preston Police and other of its officers, to deliver to those on Operation Wolf, which tackles exploitation of the elderly.

Other recipients have included programme members of PNE Forces – the programme that supports past and present Armed Forces personnel and their families – in an initiative being jointly delivered by the Royal British Legion, Compass Group and Veterans in Communities.

In partnership with Places for People, service users of Mill Bank Wellbeing Centre have also been the recipients of Festive Hampers.

Members of the public – both children and adults – have also contributed to the initiative.

Primary school children’s Christmas cards have been included in the hampers, to provide an uplifting and positive message when reaching their recipient.

The 12 Days of Fitmas campaign has also been running, providing daily and light-hearted exercise routines for PNECET participants and members of the community to try from home, while raising funds for the Festive Hampers initiative.

Online fundraising has surpassed more than £1,000 thanks to the support of the local community and the club’s first team squad, with players also donating to the initiative and the club itself making a donation.

Speaking after the conclusion of the initiative, Head of Community Tom Drake said: “We were determined to again show our support for our local community over the Christmas period with a second hampers initiative this year.

“While we wanted to help provide for those in need in our community at Christmas time, this initiative has also coincided with a second national lockdown, and therefore the need has been as prevalent this time around winter as it was for our summer initiative.

“Working with various community organisations and the club, we have delivered hampers to hundreds of people in need, not only providing essential items, but hopefully a timely festive boost as well, with those seasonal items bringing some festive spirit.

“As a proud community club, it is vital that we reach out to meet the needs of those in Preston and the surrounding areas, particularly at this continued unprecedented time of need as we adapt to the changing demands of PNE fans and our programme members.

“We’re thankful to everyone who has donated to this initiative and to all of the community organisations we have partnered with to deliver the hampers. We will continue to provide as much on-going support to those in need in response to the pandemic in the New Year.”