Since deliveries of PNECET Helping Hampers began late in April, the Trust has come to rely on a number of volunteers to assist with the distribution of hampers to the most vulnerable members of the Preston community.

Deliveries began after the Preston North End first team squad and management’s donations allowed the campaign to get up and running with deliveries to the Trust’s PNE Forces, Sporting Memories and walking football participants. 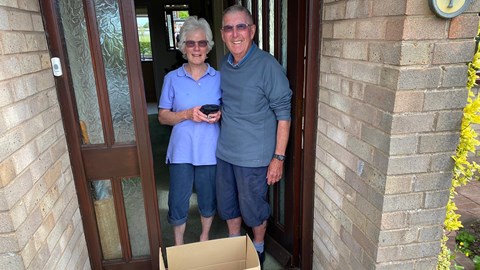 More recently, elderly season ticket holders have been the recipients of the hampers, which contain essential food and toiletry items, as well as reading materials such as North End matchday programmes.

More than 600 have now been delivered, and among those who has been involved in the efforts behind the scenes to pack and deliver hampers has been one of our volunteers, Paul Whelan, a Sherwood Primary School teacher and a Lilywhites supporter to boot.

Paul has seen how hampers have benefitted recipients – particularly those who are self-isolating – of course by receiving essential goods, but also the social aspect of having a hamper delivered, with doorstep conversations being much-needed in some cases.

That has certainly been the case for Paul, who follows the Lilywhites home and away and has delivered hampers to a number of fellow season ticket holders.

“It’s quite funny actually, one of the deliveries, I think I had seven to do one day and I knew five of them!” he said. “It took a lot longer because you’re having a bit of a chat with them about how they’re getting on.

“When people don’t know anything about it, they look at you a bit strange at first with your mask and gloves on and they must think, ‘Who’s this person at the door?’ Then you tell them that they’ve been nominated for a hamper by a loved one, a friend, a relative, and you can see on their face that they just open up and start smiling.

“I had one lady whose husband had recently passed away, she was struggling a little bit and I had to put the box on a stairlift. But she was at the top of the stairs and she was showing me pictures of her husband with Sir Tom Finney and signed pictures, so she was so proud that it was Preston North End thinking about her, which was great.”

The Coronavirus pandemic has, of course, caused difficulty to so many, but Paul has been pleased to see the club and the Trust’s community activity taking place during this time.

“I think they’ve come out of it very well and the community side of things has been amazing; every time I go down to North End to do the delivering, it’s just amazing the amount of boxes that are there.

“Just thinking that you’ve delivered to 600 people or so now – that’s a significant amount of people who, without that help, might have been struggling.

“I’ve helped pack the boxes as well and they’re absolutely full with lots and lots of different things that will keep people going for a while; some books, some crossword puzzles and programmes from North End. But it definitely brings a smile to somebody’s face who may not have seen anybody for a while.”

You can nominate a vulnerable person to receive a hamper by emailing community@pne.com.