As we continue to highlight the work of our volunteers across Preston North End Community and Education Trust programmes, another of those helping with the PNECET Helping Hampers has underlined the good-natured actions of others while out on deliveries.

Nicola Parkinson works in the education sector but has been volunteering on the joint campaign by the club and PNECET to deliver food hampers to elderly season ticket holders and the most vulnerable members accessing community programmes.

Donations from the first team playing squad, staff and general public allowed the campaign to kick off in April, with visits to those in need in Preston being undertaken since, and it has been with the assistance of people like Nicola that deliveries have continued to be made every day.

☺️ Nicola is one of our #PNECET Helping Hamper volunteers who has been inspired by the way the community has come together during this time and she's determined to continue volunteering in the future! 🧺

Nicola became aware of the initiative through neighbour Paul, also a volunteer for the campaign, and it is that similar sense of community togetherness which she has also witnessed visiting vulnerable members of the community with hampers.

“My next-door neighbour Paul is also volunteering at the moment and we were out one Thursday evening clapping for the key workers and NHS and he mentioned he had been out delivering hampers.

“I asked who for and how you get onto doing that and he put me in touch with PNECET. I wanted to do something, there’s enough to do at home but you want to feel like you’ve got some worth and I’m doing some good while I’m off. 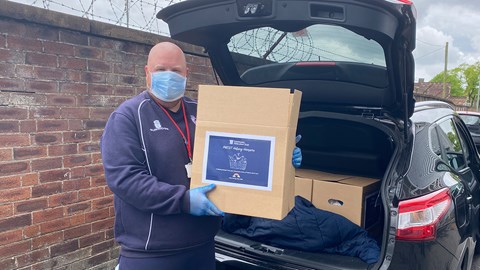 “The feeling that you get of doing something good, I’ll never forget the first day out delivering the hampers, the people I met and the appreciation I got was unreal and you kind of go, ‘I’m just driving around delivering boxes.’

“You’re not a heroic or anything like that but for some people, just to have someone to talk to and bring some vital items they need for the fridge and the cupboard, it was just fantastic and I guess that was the hook that kept me.

Nicola has been inspired by the kind-hearted actions of others she has learned of while out delivering the hampers as well.

“There have been some lovely people, people are so resilient, I’ve met people in their 90s and, yeah, they’re a bit lonely and they do want to chat, but that’s been fantastic because I’ve been able to give them some of my own time and have a chat with them and I’ve been invited back for tea and cake when all this is over!

“Everyone’s pulling together and everyone is so grateful for any small amount of help they receive. They’re also helping people who are also as less fortunate as well; I met a 91-year-old lady who is cooking meals for people in her street.

“I met another couple, because I’d been with a hamper, I noticed when I was doing my rounds two weeks later, they’d nominated somebody else to receive a hamper that lived a few doors down from them.

Nicola said she had always wanted to volunteer previously and that the current experience has encouraged her to seek it as a more permanent fixture of her routine in the future.

“What this furlough and doing the volunteering has really brought back to me is that we should make time for this, not just now because of the circumstances we’re in, but continuing to do so.

“It is definitely something I will continue to do in the future, whether that be through Preston North End or whether it be elsewhere, I’ll be looking for more volunteering opportunities in the future.”