Preston North End Community and Education Trust have been underlining their mental health work as part of the EFL Day of Action, including the club's partnership with mental health charity Mind.

The EFL has joined forces with Mind, the mental health charity, in order to improve football’s approach towards mental health and to raise awareness of the issue.

The EFL has joined forces with Mind, the mental health charity, in order to improve football’s approach towards mental health while raising awareness of the issue.

💭 Ahead of #HeadsUp weekend, we are encouraging everyone to #KickOffAConversation. 💙

If you’re worried about the mental health of a mate, the first team squad have some tips from @EFL charity partner @MindCharity on how to start a conversation. 👇#pnefc #OnYourSide. pic.twitter.com/NqYtw1PZeK

Prior to the game, the North End first team squad released a video featuring tips on how to start a conversation about mental health.

North End also supported the campaign by warming up in Heads Up T-shirts at the DW Stadium, with the Heads Up logo also featuring on the sleeves of their kit that day.

Episode seven of the PNE Podcast also focused on the campaign, looking closely at the work that PNE Community and Education Trust does to help those suffering from mental health problems.

PNECET has recently worked closely with 13-year-old Joe Martin after he tragically lost his father to suicide in 2018.

Joe was already struggling with his mental health and was first referred to Child and Adolescent Mental Health Services (CAMHS) three years ago. Last year, the Lune Valley FC player, of Lancaster, began to suffer from anxiety within a football environment, causing him to become nervous about playing in matches.

His mother, Jenny Rigby, sent an email to the Trust with the hope of finding health and support for Joe through football.

She explained that, as part of his work with CAMHS, Joe had learned that rediscovering his confidence and enjoyment of sport could prove one of the best routes to aid his recovery.

Assistant Head of the Trust, Harriet Creighton-Levis, visited Joe and his family at his school and explained to the podcast what would follow.

🎧 The latest #PNEPodcast is out! 🙌

We discuss the #HeadsUp campaign and we're also joined by Declan Rudd, Lee Cartwright and former Podcast host @guyclarke05 to give an insight in to the Latics.

She said: “I went into school and met Joe and his family for the first time and it was a lovely experience.

“Joe opened up quite quickly about what he’s suffering with, with losing his dad to suicide.

“We put a programme in place focusing on resilience, confidence and communication to support and help Joe through the power of sport and PNE.”

Joe is now a key member of the PNECET matchday team, helping co-ordinate and run half-time activities, including the half-time penalties.

He also makes appearances at the club’s soccer school camps and speaks to the young players and participants, helping them and giving them footballing advice.

Harriet added: “For Joe, at 13 years old saying that he wants to help other young people like him, it’s credit to him and his family.

“We want to support Joe on that journey through Preston North End Community and Education Trust.

“The first time I met Joe, after the meeting with him and his family, his mum pulled me to one side and it said it was one of the first time she had seen Joe smile like that, after we said that we were going to commit to working with him.

“Every time I see Joe he’s got the biggest smile on his face and that’s justice to the work that we’re doing and the help that football has.”

Joe was also given a guided visit of PNE’s training ground and has since developed a friendship with goalkeeper Declan Rudd.

Rudd told the PNE Podcast: “It [mental health] is something very close to me. I’ve had my troubles with it in the past and it’s something that I still deal with now.

“I had the chance to help Joe out when he was going through a tough time. I invited him to the training ground and we showed him around, we showed him in the dressing rooms and in the gym and canteen.

“Then we had a little kickabout with him on the training pitch. It was good to put a smile on his face and hopefully take those worries away from him, and hopefully give him some good memories to hold on to and build on, so it’s all important to do that.

“If I can do one little thing to help a lad out who is struggling, it makes it all worthwhile.” 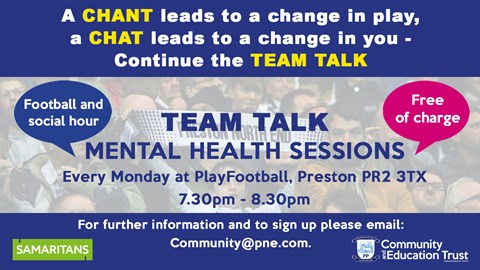 Preston North End Community and Education Trust have also recently begun to deliver a new mental health programme – Team Talk – combining mental health discussion and physical activity in a one-hour session every Monday night, from 7.30pm until 8.30pm at PlayFootball Preston (PR2 3TX). To join this session, simply turn up on the evening, or for more information you can contact the community department on 01772 693309 or community@pne.com.

We are also looking for a sponsor for the Team Talk mental health programme so please get in touch via the same details if you feel that you, your business or someone you know would be interested in sponsoring this initiative.

To find out more about the Heads Up campaign and to get tips from its charity partners – Mind, CALM, Sporting Chance and Heads Together – visit http://www.headstogether.org.uk/heads-up/.

Those wanting immediate support can also text ‘HeadsUp’ to 85258 to connect with a trained crisis volunteer – a service run by ‘Shout’ and powered by Crisis Text Line, which is available 24/7 and free to text from most mobile networks.

You can also get involved in the conversation by using #KickOffAConversation and #HeadsUp.