The Community and Education Trust have been delivering a variant of their PNECET Helping Hampers, consisting of books, matchday programmes and further reading materials, to four care homes in Preston. 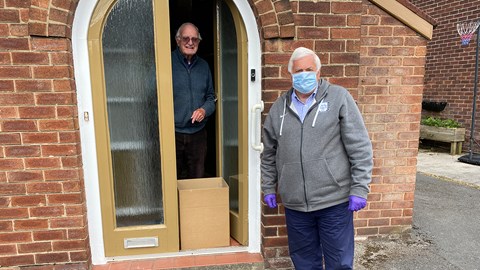 The hampers were delivered during Dementia Action Week, and speaking of the initiative, PNECET Community Partnerships Manager Rebecca Robertson said: “We want to support the people who are living in the care home by giving them some reading materials, something they can look at.

“We have had some books donated to us by local authors, some of them talking about Preston North End in the sixties. We’ve also got some programmes that we’ve used and different chair exercises; something to get people occupied and doing something.

“People that are suffering with dementia can use reading as a really good way to keep the brain occupied, keep them thinking and maybe jog some memories.

“If any of them are Preston North End fans and they’re reading through the programme, it may just give them something that reminds them of a happy time or something that’s happened previously.”

Banksfield Nursing Home Activity Coordinator Sam Mitchell explained that residents would be grateful for the materials provided and even suggested it could lead to them following North End in the future, once football returns.

“Some of them aren’t coping well because they can’t see any family and friends, they can’t really go out at the moment and do things.

“They all really appreciate it. Some of them won’t have been to football before, but after they’ve read the books for something to do, they might become more interested and maybe come to see [the team] in the future and watch the players.”

Banksfield Nursing Home Resident Fred Wilkinson added: “It’s very nice. I love reading and I will be interested to find out about North End.”