A current student of our USW foundation degree in Community Football Coaching and Development, Kieran Houghton is a prime example of how aspiring coaches and sports professionals can progress through the education pathway at PNECET.

After graduating from the Level 3 diploma in Sport course, he chose to continue his journey with the Trust by studying the foundation degree in Community Football Coaching and Development, which is offered in conjunction with the University of South Wales.

His continued success has seen multiple opportunities in sport presented to him. After completing his FA Level 2 award in football coaching in 2018, Kieran now works as a coach for Cadley Boys FC’s under-16 side, a local grassroots team. 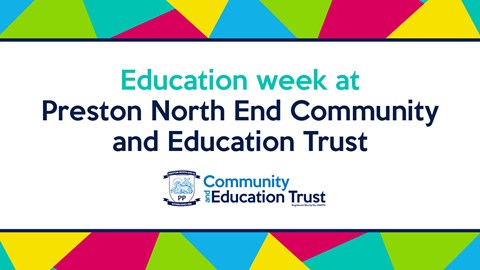 Trust To Highlight Impact Of Its Education Programmes

Not only that, but Kieran is employed on a part-time basis by PNECET, assisting with a range of our provisions.

Kieran works on home matchdays for the club, comprising numerous activities – including co-ordinating the half-time penalties for grassroots teams visiting Deepdale – as well as providing support to our Premier League Primary Stars team.

Senior Schools Provision Officer Jack Mountain spoke of how Kieran has become an important and reliable member of the Primary Stars team.

“In the Primary Stars sessions, Kieran delivers mini games that encourage teamwork and communication, using equipment to link it to a sporting example such as football.

“Kieran has demonstrated key attributes of a good coach, including professionalism with the children and teachers, being a reliable member of staff and always turning up for sessions and also showing a range of sporting knowledge.

“He’s been able to transfer these skills into other areas of the community, too, as he regularly works on matchdays in the running of the half-time game and delivering birthday parties, as well as working as a coach on our Soccer School camps.”

Recruitment and Higher Education Manager Graeme Atkinson has been pleased to see Kieran’s growth as he’s progressed along the education pathway at PNECET.

🧑‍🎓 The foundation degree offer at #PNECET is delivered in partnership with the @EFLTrust and @UniSouthWales!

The degree can be taken up on completion of a Level 3 course, with two residentials a year and lectures delivered by our staff at Deepdale throughout the year. 📚#pnefc https://t.co/A6HhYnHJa6 pic.twitter.com/y2b1mvA67v

“Kieran is a very reliable student who meets all of his deadlines, achieving excellent results,” said Graeme.

“He is a very conscientious person, who is enrolled on the foundation degree in community football coaching with USW with glowing references from his lecturers.

“His coaching is of a very high standard and I would expect him to go on to develop future players.

“Kieran communicates well and he is one of the first ports of call for our staff to cover as support staff.”

Kieran added: “I very highly recommend studying with Preston North End as the tutor support has helped me gain the best grades possible.

“I have also gained plenty of paid work around the community to give me a taste of working within the sports industry, which I feel has been highly beneficial to my CV and for my ability and development as a football coach, which is the career path I wish to take.”

Kieran’s case study was originally featured in our 2019 Impact Report, showcasing the impact of the club’s community department in Preston and the surrounding areas for the last calendar year, which you can read by clicking here.