Preston North End will celebrate its recently agreed partnership with Andy’s Man Club at this weekend’s home fixture against Barnsley.

Preston North End Community and Education Trust, the club’s official charity, has partnered with Andy’s Man Club to bring the Preston branch to Deepdale in the future. 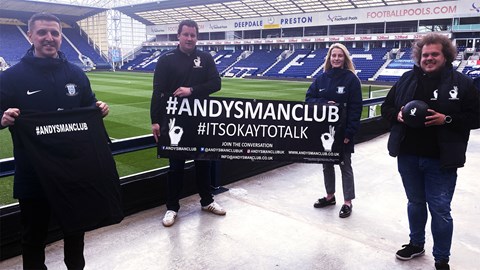 Players will be wearing Andy’s Man Club t-shirts during their pre-match warm-ups ahead of the game, raising awareness of the Preston support group for men over 18-years-old, and promoting mental health. A banner will also be placed in the stand at Deepdale.

Andy’s Man Club is a registered charity that was founded in 2016 after the tragic suicide of 23-year-old Andy Roberts. A weekly group in Halifax was formed thereafter, allowing men to come together to discuss their mental health in an open and welcoming environment. There are now 45 groups nationwide.

The Preston group of Andy’s Man Club was first founded in November 2020 at Penwortham Cricket Club, where the group continue to meet every Monday evening at 7pm, in a Covid-19 compliant capacity.

A date for the switch to Deepdale will be confirmed in due course.

To get involved with the group, please email info@andysmanclub.co.uk.