Preston’s Centre of Sporting Excellence learners celebrated their completion of the 2020/21 academic year with an end-of-season presentation at Deepdale.

Thirteen young people won awards for their achievements both in the classroom and on the pitch with the Centre of Sporting Excellence in the past year. 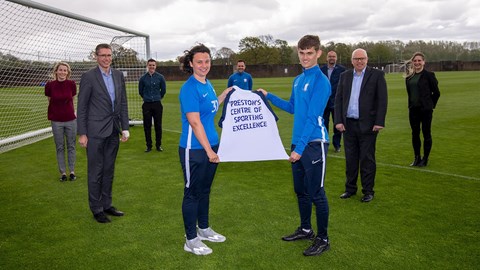 Preston North End Community and Education Trust and Preston College together offer Diploma in Sport qualifications – at levels one, two and three – as part of the Centre of Sporting Excellence partnership.

Learners have the opportunity to gain valuable knowledge in multiple sporting disciplines, access unique work placement opportunities from both organisations, and represent the Centre of Sporting Excellence in national football leagues as part of studying a Diploma in Sport qualification.

Michael Broadbent was the winner of the Overall Academic Learner of the Year and was awarded a signed 2021/22 Preston North End home shirt in recognition of his efforts, while there were also awards voted for by manager and players for each of the four football teams.

Preston’s Centre of Sporting Excellence Curriculum Leader Jodi Collum said: “We believe it is important to bring our learners together at the end of each academic year to celebrate their successes and achievements in all aspects of their course.

“It has again been another challenging year for our learners but we have been delighted by how they have continued to engage with their studies through various lockdowns and changing restrictions in society while still supporting one another as well.

“Our tutors are always challenged to select just a few winners of these awards at the end of each year, but it’s fantastic to be able to celebrate those high achievers, as well as recognising the hard work of all of our learners throughout the year.

“We wish those moving on from Preston’s Centre of Sporting Excellence every success in their future career, in the knowledge that they are well-prepared for their next steps, while looking forward to seeing the progression of other existing learners, alongside plenty more young people who will be enrolling with us from September.”

The Centre of Sporting Excellence has seen more than 100 learners complete their studies in the 2020/21 academic year, with around half of those now progressing to the next level of their Diploma in Sport qualification.

This year’s award winners were as follows:

To register your interest in enrolling at the Centre of Sporting Excellence, please contact graeme@pne.com or visit pne.com/newstudent.