Olivia Hooper felt the women’s team performed well throughout their 2-0 victory over Accrington Stanley on Sunday, which was their final outing before a three-week Christmas break. 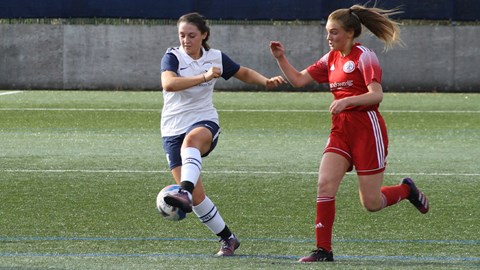 Abi Cookson and Georgia Parkinson scored at the very start and very end of the first half in a comfortable away win for the Lilywhites.

Olivia told PNE.Com: “It was a fantastic start by the girls with an early goal from Abi. It definitely gave us that boost we needed. The quick start from the team really set the tone for the game and the girls seemed to thrive oﬀ of it.

“They were two very well taken goals from Abi and Georgia. I think we played very well throughout the game today. At times we did try to force the ball forward when it wasn’t on because I think we just wanted the comfort of another goal early on.

“We moved the ball all over the field and connected aﬀectively. We started pressing higher and applying more pressure onto their back line and I think it really lifted our performance.”

Olivia agreed that the team could have taken more chances but focused on the positives of getting into the positions to create those opportunities.

“Obviously, we would have liked to have scored a few more but credit to their goal keeper for making some huge saves for her team. But we do need to be clinical as well so it’s something for us all to work on when we come back after the break.”

The women’s team host Carlisle United Ladies in their next fixture on Sunday 9th January.