Preston North End Community and Education Trust has provided continuous support for a Preston resident to such an extent that it has allowed their family to move into a new home.

The single parent, whose identity will remain anonymous for confidentiality purposes, was granted custody of their two children in recent months, after making a full recovery from being sectioned earlier in the year. 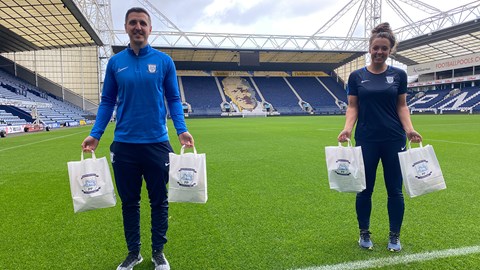 However, he was unable to immediately provide for his children, due to delays in receiving benefits and payment from full-time work, and not having the financial resources or home set-up to alter that reality for his children.

When he first resumed care of his children, their clothing was deemed to be not fit for purpose. With only two sets of clothing for each child, the single dad received an £80 clothing grant, but that would only go so far – some of it having to be spent on school PE kit.

Having also been supported by local food banks, the dad of two first engaged with Preston North End Community and Education Trust when he was referred by a teacher at his youngest daughter’s school.

That was through the Trust’s Happy Holiday Club initiative, which provides physical exercise sessions and nutritious free lunches in school half-term periods, for children who would receive a free school meal during term times.

“The teacher sent us an email saying that PNECET was providing free school lunches and he thought we would benefit from that.

“That first week that he sent us that, he was aware that I had a crossover with benefits.

“The second week in, the Trust brought two days’ worth of those lunches. We had nothing. I was due to get paid the following week and it took a total of nine weeks from start to finish to get paid. Then on the Friday, we were given two weeks’ worth of food.

“I didn’t need to go out, the other food bank that delivered to us, I was able to tell them we didn’t need it because we then had more than enough.”

However, the Trust’s support for the single dad and his family extended much beyond solely food provision.

He added: “We were given bags and bags of clothes. Everything we’ve been given, we’re using, and the stuff that hasn’t, we gave it to our school food bank, which is then given out to other children.”

That support has lasted for more than two months, taking the family up to the point of now moving into more appropriate accommodation.

“It has given me breathing space,” the single parent continued, speaking of the Trust’s support.

“The gift cards that we were given were huge, and a weight off of me. I’ve got the shopping for Christmas, the whole food shop for us moving out was there. With that, I could get all the bits that I usually couldn’t get for the kids.”

After being granted custody of his children at a particularly challenging time, the support of the Trust allowed the single parent to focus on moving forward with positivity, now culminating in that move to a new and improved home.

“All the support I have got from PNECET has smoothed that process. I haven’t had to worry about those little things.

“While I’ve been getting to know what the kids do, things have been there that wouldn’t have normally.

“My daughter brushes her teeth four times a day. If that toothpaste wasn’t there, that’d be me having to go out and I’d be thinking, ‘Well, why haven’t I got it?’ and then the pressures of all that. It’s just given me time to get used to being their dad.

“It’s massively helped me change the life because it’s given me a break. Nothing was in place. I had maybe two sets of clothes for the kids, I didn’t have anything. What PNECET has brought me and other friends, it’s helped me change. Now, we’re moving into a house.

“I don’t even know where I would have got the clothes from. The amount of time I would have had to try to get help to get the clothes, it’s taken so much pressure off. Without it, we wouldn’t be able to move into this house at all.”

For more about how you can support or receive help from the Trust, please contact community@pne.com.